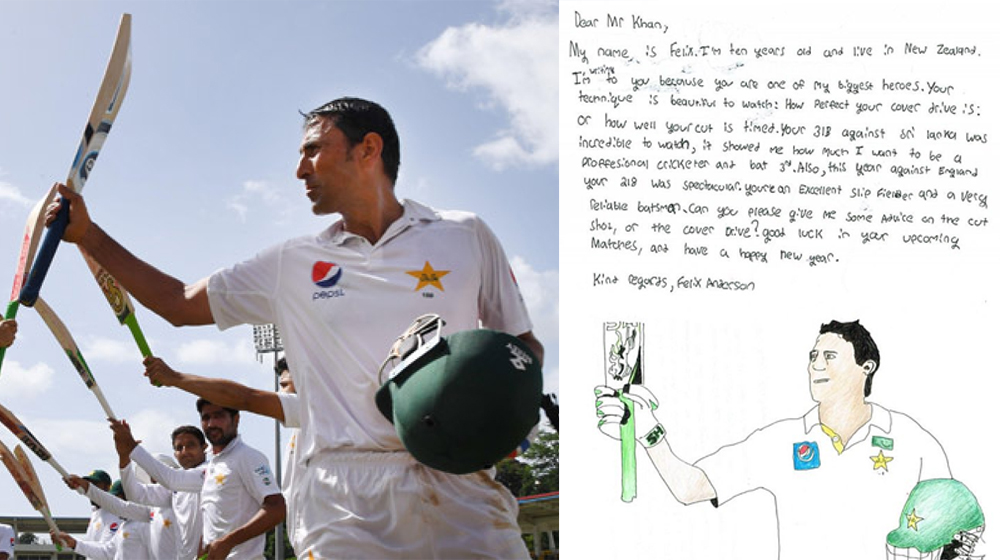 An adoring fan from Auckland has written a letter to the former Pakistani captain and prompted a heartwarming response from him, one which he will never forget.

Felix Anderson, who is only 10 years of age, mailed a handwritten letter to Younis Khan, asking him to impart his wisdom since his technique was ‘beautiful to watch.’

He continued and wrote, “I’m writing to you because you are one of my biggest heroes. Your technique is beautiful to watch.”

“Your 318 against Sri Lanka was incredible to watch, it showed me how much I want to be a professional cricketer and bat 3rd.”

In the note, Felix asked Younis for tips and “some advice on the cut shot or cover drive.”

The former captain, who has the most number of runs and centuries for a Pakistani in Test history has responded to Felix, two years after the note was sent.

Younis Khan shared the endearing letter on his social media and apologized for his late response. He responded with this post on Twitter:

Dear Felix, thank you for this sweet letter. I know this is almost two years old, but it only came across me now. I will surely make a small video to give you some tips as you requested 🙏🏻 pic.twitter.com/Mhaz5nTsfn

Keeping his promise, Younis Khan turned up in nets, all padded and ready to give some key lessons to the Auckland boy. Here’s how it looked:

As promised, here is the coaching tip manual on the cover drive and cut shot for the 12 year old Felix from New Zealand who wrote a letter to me. I hope you enjoy this, practice it & improve your game. All the best Felix. Hope to see you playing for your country one day 😊 pic.twitter.com/lnzP2yz9gT