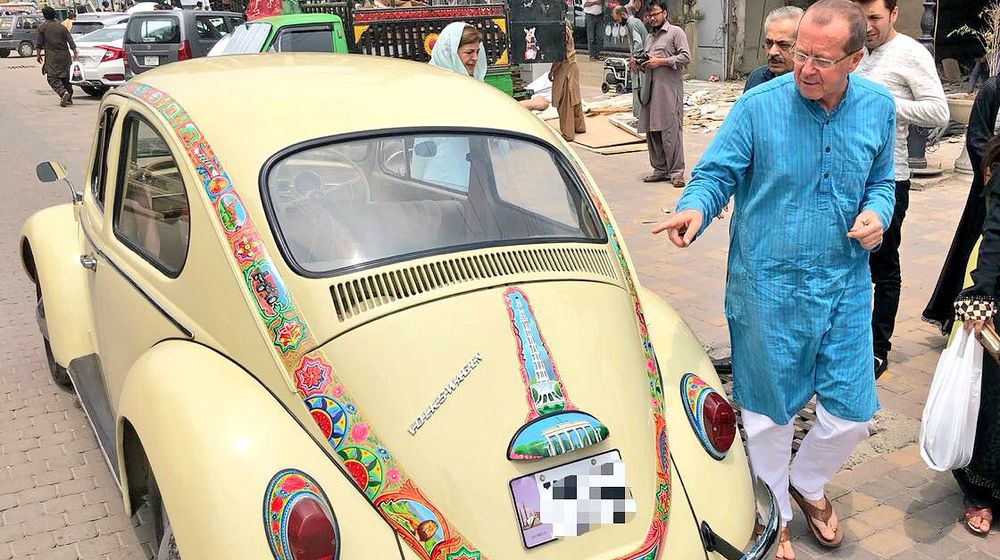 The German ambassador to Pakistan, His Excellency Martin Kobler, has become something of a social media darling. There’s no doubting his understanding of local culture and customs that we all know so well. And hes also good at showing us the way forward when need be. Plus he’s always asking us for suggestions and its only fair that we help him out.

The much-adored Ambassador recently asked people to give him suggestions for painting his Foxy with truck art a few months back. Unsurprisingly, he was bombarded with many suggestions, with many of them ranging from practical, to plain old humorous ones.

Now, based on the feedback he got, Mr. Martin took the advice of the local Twitteratti and has finally unveiled his Foxy with Pakistani truck art.

Take a look at the newly unveiled iconic machine with minimalist truck art design which Mr Martin settled on:

WOW 😍 finally the wait is over. I love my new foxy with the #truckart design! such an amazing combination of a german car and a pakistani design!! Isn’t it beautiful?? What do you think? pic.twitter.com/iULIBK7KgM

Pakistani tweeps responded in droves. Here are some of the best responses to the German Ambassador’s tweet.

Dear sir, no truck art is complete without a hopelessly romantic quote hanging at the rear! I suggest you get one ;)

The ambassador was quick to ask for suggestions once again.

Can u suggest one?

Pakistani Twitter was glad to oblige. What followed was a bunch of slogans that we are familiar with and see on the roads daily.

The quote on picture 1, is great. But still it's your choice pic.twitter.com/FdVbcsMQ7b

Its all about the small details:

Some of us are already lining up to confer honorary citizenship to Mr Kobler:

Mr.Kobler can we possibly make you an honorary Pakistani citizen? Your love for Pakistan and every thing Pakistani is very heart warming

The design looks so sleek that people are making Martin Kobler offers to buy the car.

If you plan on selling this beauty, here I am 🙋🏻‍♀️

I think we can all agree that this is the last word regarding Mr Ambassador:

Out of many things in the world, Martin Kobler is the best thing that Germany has given to us. Love that man yaar

What do you think his new-look Foxy?