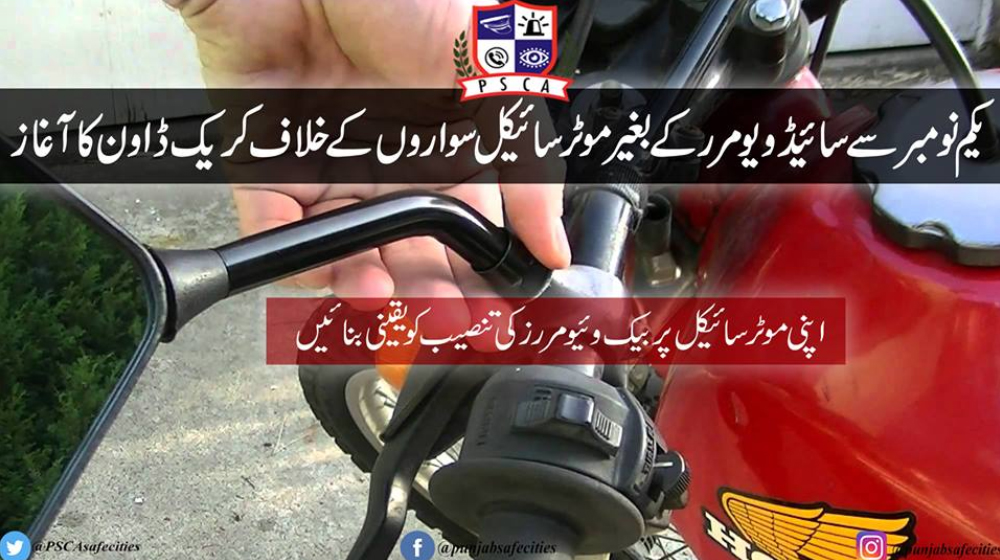 You might have to face heavy fines if you don’t install side-view mirrors before the deadline.

Lahore Police is set to make the city’s traffic more safe and secure, and has introduced a number of regulatory changes to improve its control over the metropolitan’s traffic.

As part of its latest changes, Lahore authorities have made it compulsory for citizens to re-install rear-view side mirrors on their motorcycles, and those who fail to comply will be penalized.

The change will take a week or so to be put in effect, so that citizens can take notice and prepare themselves for the city’s new law, which will be fully implemented starting 1st of November. Motorcycles riders with no side-mirrors will face heavy fines after 31st of October.

As per Liaqat Ali Malik, the city’s CTO, citizens should install side-view mirrors in their motorcycles to ensure safety, so as to maneuver with ease in harsh traffic, he said in a public service message.

Lahore Authorities on a Crackdown

This isn’t the only change that we got to see recently. Lahore authorities have started a crackdown to inflict greater control over motorcyclists, as well as other commuters who fail to comply with the region’s traffic laws.

Another recent change was done in relation to underage drivers – a common occurrence in Pakistan – in which parents were to be fined or worse, jailed for non-compliance.

The authorities also started issuing e-challans using Punjab Safe City surveillance cameras. Any person who violates a traffic signal will be sent a digital e-challan after his/her vehicle’s number plate gets scanned by any camera while ignoring a traffic signal.

The list goes on. We expect authorities to make similar changes in other cities like Islamabad and Rawalpindi as well.