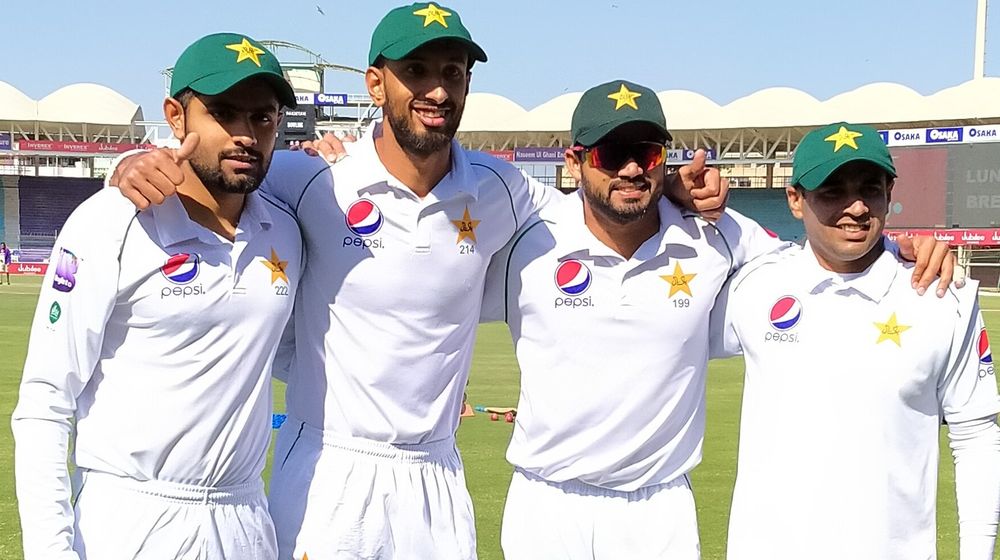 Pakistan cricket team has completed a historic win to clinch the series which has marked the return of Test cricket in the country. In doing so, Pakistani cricketers broke plenty of records, both with the bat and the ball.

Abid Ali, Shan Masood, Azhar Ali and Babar Azam scored centuries in the Test to mark only the second instance in Test cricket’s 130+ year history where the top 4 of a batting line-up made tons.

The previous occasion was when all of India’s top 4 scored hundreds against Bangladesh. Dinesh Karthik, Wasim Jaffer, Rahul Dravid, and Sachin Tendulkar made the record in 2007.

It is the first time ever in Test cricket that a team’s top 4 have gone on to raise their bat in the second innings of a match. Shan Masood smacked 135, Abid Ali made 174, Azhar Ali scored 117 whereas Babar Azam finished unbeaten at 100 when Pakistan declared at 555/3 on the 4th day of the Karachi Test.

191 all out in the first innings is the 4th lowest score ever by Pakistan in a Test match at the National Stadium in Karachi.

The opening pair, Abid Ali and Shan Masood, added 278 for the first wicket which is the second-highest ever for Pakistan; the highest being 298 by Ijaz Ahmed and Aamer Sohail against the West Indies in Karachi in 1997.

The previous instance was the iconic Barbados Test when Hanif Mohammad scored 337, the longest innings ever. Openers combined 152 in the second innings after the team folded for 106 in the first innings.

This was the third instance that Pakistani openers scored centuries in a single innings, the previous instances being Saeed Anwar and Taufiq Umar in 2001 and Aamer Sohail and Ijaz Ahmed in 1997.

A First in Test History

Abid Ali is the first Pakistani player in the country’s Test history to claim the man of the match awards in each of the first two matches.

A Stellar Record at Karachi

Since the first Test match in 1955, National Stadium Karachi has been a strong home venue for Pakistan. The Green Shirts have only lost 2 matches at the venue out of 42 Tests. Pakistan lost to England in 2000 and to South Africa in 2007.

Babar Azam completed his 4th Test ton on Sunday in the second innings. Remarkably, all his centuries have come on Sunday.