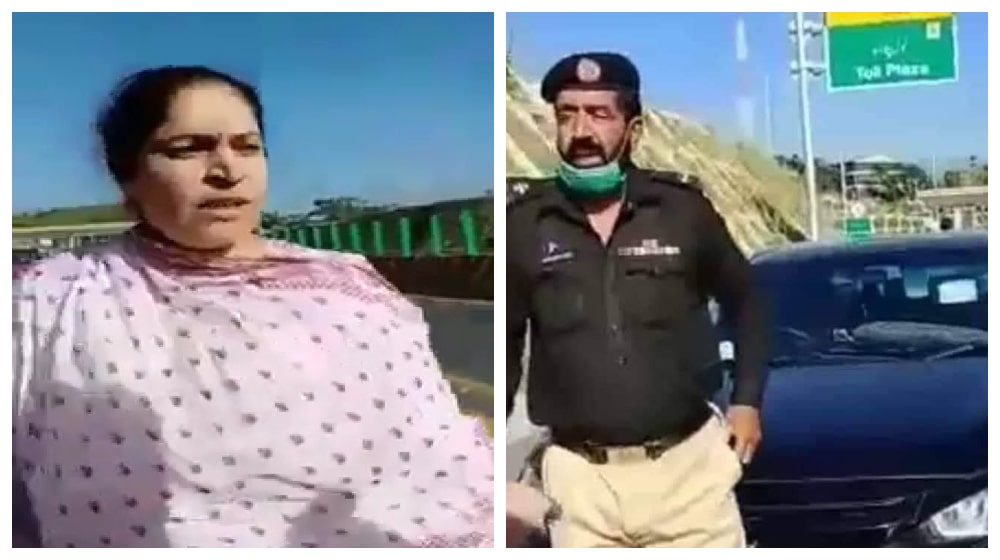 Power abuse is a very real thing everywhere in the world and even more so in Pakistan.

We have all experienced incidents where the powerful always have their say no matter whether they’re right or wrong. Recently, a video of a woman went viral on social media where she was seen abusing an ordinary policeman for doing his duty.

The brave Police officer stood his ground despite her claiming to be the wife of a powerful Army officer. One of the duty officers recorded the video of the whole incident and today, it is all over the internet. With hashtags like #کرنل_کی_بیوی, #ColonelKiBiwi, and #COAS, everyone in Pakistan is demanding that she should be punished for her arrogant behavior.

If you haven’t seen the video, watch it here:

Disgusting n shameful.
No one is above law. She is defaming whole institution.
ARMY should kick off such cheap minds from offices. This lady must be behind the bars asap.

As per some social media users, she is the wife of Lieutenant Colonel Muhammad Farooq Khan. The misbehaving woman repeatedly used the Army card to pressurize the Police officers on Hazara Motorway where there the road was closed off due to some reason.

Despite the fact that the Police officer was talking in a respectful way, the Colonel’s wife called him names and forcefully broke the barrier to get going on her way.

Police Arrests Aqeel Mirza for Assaulting a Man at Gunpoint

The whole incident has sparked plenty of debate on the matter with a vast majority of the users bashing the woman while urging the Chief of Army Staff to take notice. As per the reports, the COAS has already taken notice of the matter.

Some soul searching is in order.

Let’s have a look at what the people are saying:

Dear @OfficialDGISPR i think justice should be equal for all of the people whether they are a small police official or a colonel wife. Hope to see justice from your side#کرنل_کی_بیوی pic.twitter.com/gfrCi3eaNq

Well done? For what? Find it odd that journalists instead of raising questions are all too ready to shower praise on the #COAS without giving much thought to the legal standing/implications of his actions. Sawal karna mana ha kiya? https://t.co/XgaOYh2yj5

All those who are commenting on #ColonelkiBiwi there's a special ride waiting for you.#کرنل_کی_بیوی pic.twitter.com/8bqAGFyVfD