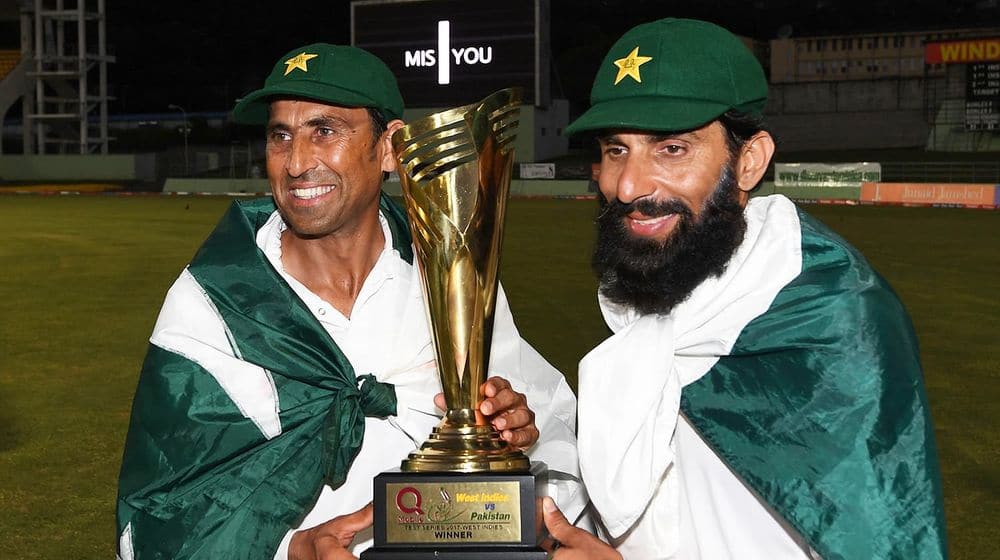 The prospect of two legends, Younis Khan and Misbah-ul-Haq, reuniting in the dugout excites every Pakistan cricket fan. Younis has joined the coaching staff as a batting coach alongside Mushtaq Ahmed who will serve as the spin bowling coach.

The duo of Misbah and Younis, often called MisYou, have given the Pakistanis a number of moments to cherish throughout their partnership on the cricket field.

While batting together, Misbah and Younis scored 3,213 runs in 53 Tests innings at an average just under 70. On 15 occasions, they made century stands, while the number of their half-century stands was seven. Misbah and Younis signed off on their careers in Dominica in style after inspiring Pakistan to a 101 runs victory over the West Indies, which gave Pakistan their maiden series win the Caribbean.

Let’s have a look at some of the most memorable moments they shared during their playing days:

In his debut Test as captain, Misbah-ul-Haq bailed the team out of trouble to secure a draw on the fifth and final day, courtesy an unbroken 186-run fourth-wicket partnership with Younis. Coming together at 157 for three in pursuit of a 451-run target, the two batted together for 57 overs to ensure a draw.

Younis scored an unbeaten 131 off 230 balls, while Misbah was not out on 76, coming from 185 balls, which included eight fours and a six.

Younis scored a masterful 127 in the second innings, while Misbah grafted for useful 31 as Pakistan completed a famous 3-0 whitewash against England, who were then the number-one ranked Test side in the world.

Pakistan had made a remarkable comeback after being dismissed for 99 in the first innings on the opening day of the Test.

Younis had looked slightly off-color in the opening two matches of the series while Misbah scored 52 in the first innings of the first Test.

Younis finished the series in style in a match-winning 216-run partnership with Azhar Ali (157) as Pakistan celebrated a historic series sweep by securing a 71-run win.

Younis scored a memorable second innings double-century (200 not out, 404 balls, 15 fours, three sixes), while Misbah contributed 52 off 157 balls – his second half-century of the match – in Pakistan’s convincing 221-run win in the first of the two-Test series.

Younis added 116 runs for the fourth wicket with Misbah to steady the tourists after they were left reeling at 23 for three, after trailing by 78 runs on the first innings.

Once the foundations were laid of a comeback, courtesy the partnership between the two senior batsmen, Younis went onto play a central part in Pakistan’s rearguard which was well supported by the bowlers who blew away the hosts for 120 runs in the second innings in Zimbabwe’s 342-run chase.

A 218-run partnership between Misbah and Younis helped Pakistan post 383 in the first innings after Sri Lanka were bowled out for 204. Once again, the pair had come together with Pakistan in a sticky spot. This time the scorecard read 83 for three.

Pakistan salvaged a sensational last-day win to secure a 1-1 result in the three-match series. Set 302 runs to win in the final two sessions of the match, Pakistan went past the target in 57.3 overs.

Misbah batted with his usual composure and rotated the strike brilliantly in his unbeaten 68 off 72 balls – his second half-century in the match – while Younis contributed 29 off 42 balls. Misbah added 109 runs for the fifth wicket with Azhar (103) to secure a famous win for Pakistan in fading light at the Sharjah Cricket Stadium.

The run-machine, Younis Khan, produced two scintillating centuries – 106 off 223 in the first innings and an unbeaten 103 off 152 in the second innings.

Pakistan posted an imposing 454 all-out in the first innings of the match, thanks to Younis whose fourth-wicket partnership with Misbah (69 off 182 balls, 2 fours, 2 sixes) was worth 83 runs before Sarfaraz Ahmed scored 109 off 105 balls.

After Pakistan bowlers restricted Michael Clarke’s men to 303 all-out in their reply, Pakistan, rode to 286 for two declared, on the back of Younis’ second ton of the match, which paved the path for the 221-run win.

The incredible pair powered Pakistan to their first series win over Australia in 20 years by topping their batting performances from the Dubai Test.

Younis scored a magnificent 213 off 349 balls (15 fours, two sixes) while Misbah scored two centuries, the second one equalling the then-record for the fastest in the format.

With a 309-run first-innings lead, the Pakistan captain stunned the world with a belligerent 101 not out off 57 balls (11 fours, 5 sixes) in the second innings to level the fastest Test hundred record (56 balls) in an unbeaten 141-run stand with Azhar Ali, who made 100 not out from 174 balls.

Misbah was named man-of-the-match while Younis snapped the man-of-the-series award.

Left 480 to chase, the Black Caps managed 231 all-out as Pakistan began the three-match series with a dominating win; New Zealand won the final Test in Sharjah to secure a 1-1 result.

Following a high-scoring draw in Khulna, Pakistan, in the second and final Test, thumped the hosts to win the series. Azhar Ali scored an impressive double-century in a 250-run third-wicket stand with Younis, who added yet another century to his tally with a 195-ball 148 (11 fours and three sixes).

With Bangladesh’s batting faltering and Pakistan securing a solid 354-run first-innings lead, Misbah smashed 82 runs – on the back of nine fours and three sixes – at a strike-rate of over 113 to set an imposing 550-run target. Bangladesh were dismissed for 221 in their chase to hand the tourists an impressive win.

Record books were rewritten in July 2015 as Misbah launched Jehan Mubarak for a six over long-on to secure Pakistan’s highest successful run chase (382 for three) in the format.

Fittingly, both Misbah and Younis were at the crease at the iconic moment as Pakistan secured their first series win in Sri Lanka since 2006 by beating the hosts 2-1 to jump to the third spot in the ICC Test rankings.

Younis, unbeaten on 171, was the central figure in the run-chase as he rescued Pakistan from 13 for two with a 242-run third-wicket partnership with Shan Masood, who registered his maiden Test century, before taking Pakistan over the line in Misbah’s company. Misbah remained not out on 59.

The iconic images of Misbah doing push-ups following his first Test century at the home of cricket and Younis marshaling the troops for the salutes after the historic win were not mere feel-good moments.

They embodied how the two men had carried the young Test side in the past six years.

Pakistan, batting first, posted 339 all-out. Misbah’s 114 was the highlight of the innings as the Pakistan captain struck 18 fours in his 199-ball stay.

Yasir Shah’s figures of 10 for 141 derailed England to win the match as Pakistan won the first of the four-match series.

Coming into the match after back-to-back defeats, Younis took upon himself to make his and Misbah’s last tour of England a memorable one as the champion batsman scored a double-century in Pakistan’s first innings after England had posted 328 all-out.

Pakistan strolled to the target in the 4th innings with ease and grace as Younis was declared man-of-the-match and Misbah man-of-the-series for scoring a century and two half-centuries.

Following the win, Pakistan became the number one ranked Test side for the first time since the official rankings were introduced in 2003.

In their final Test series, Misbah immortalized himself in the history of the game as he became the first Pakistan captain to conquer the unchartered Caribbean territory while also finishing as the most successful Test captain, while Younis joined the royalty of Test batting by surpassing 10,000 Test runs, the first player from Pakistan to achieve the feat.

The pictures of Younis Khan, standing in slip-cordon, gesturing to Yasir under a darkening sky before what turned out to be the final delivery of the series are now engraved in Pakistan’s Test history.

The images underscored how Misbah and Younis complimented and supplemented each other, while also carrying a young and inexperienced side.

With maiden Test series win in sight, Pakistan needed four wickets in the last session with Roston Chase, who remained not out for 101, and Jason Holder batting.

The nail-biting session stretched till the last ball of the penultimate over before Yasir – who took five wickets in the innings bowled Shannon Gabriel and completed a memorable win that sparked wild celebrations in the Pakistan camp.

Do you have more MisYou moments to share? Do so in the comments section.