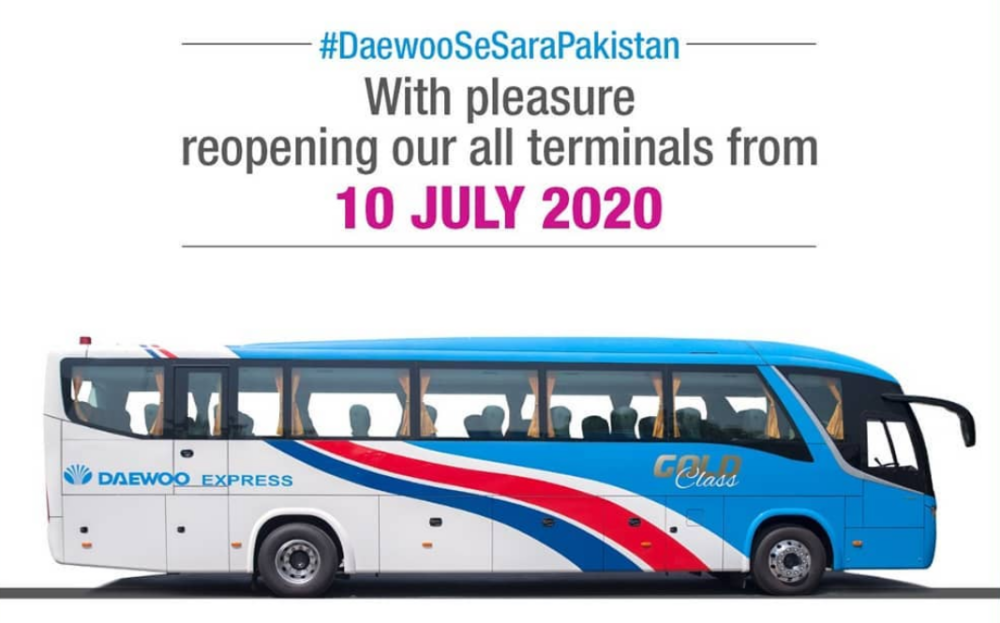 Just a couple of days ago, Daewoo Express Bus Service announced via their social media accounts that they are resuming their services in Pakistan. The service is set to reopen on the 10th of July, 2020.

Daewoo Express Bus Service is one of the oldest and most well-known bus services in the country with one of the largest fleets. Although a large number of new bus services have been introduced as of late, Daewoo Express has always remained among the top contenders in the transport industry.

On March 23, 2020, Daewoo announced that owing to the spread of COVID-19 and in order to assure the safety of the passengers and the crew, the company is temporarily shutting down its operations.

The company had to remain shut for around 2 months, but then partially resumed its operations on May 26th, 2020 under the SOP’s given by the government. Video footage was also released on a local news channel of the staff at a bus terminal abiding by the safety protocols issued by the government.

In a recent update, Daewoo Express also release a video of one of their staff member in a full PPE kit, disinfecting the bus prior to its departure to the next station.

Despite their fleet of buses arguably being as old as the company itself, Daewoo Express has long been one of the most reliable on-land commute services in Pakistan. However, there are still a couple of big points of concern pertaining to their service given the current scenario.

Firstly their buses have fixed glass windows that can’t open so there’s no ventilation, and a central air conditioning unit goes through the entire bus. Secondly, there have not yet been any reports as to how many people they would accommodate in their buses that have between 40 to 50 seats. Given these points, travelers should do their due diligence before booking a seat with them.