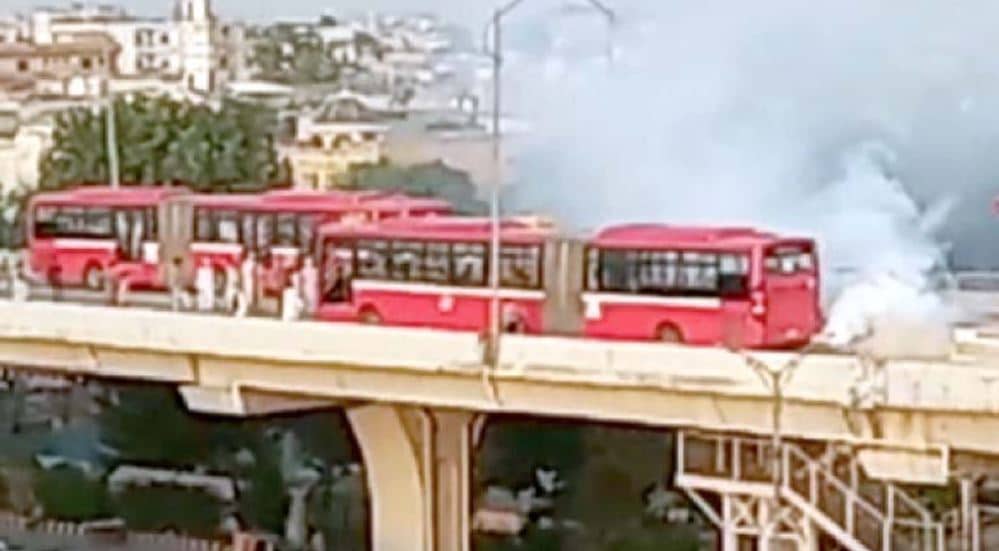 Wednesday afternoon, a Metro bus with passengers on board, caught fire as it reached near Rehmanabad stop in Rawalpindi.

Fortunately, there were no casualties as the driver reportedly spotted the flames and thick smoke coming out of the engine, which is located at the rear in these buses. Having spotted the flames, the driver pulled the bus aside and opened the doors for the passengers to disembark to safety.

Rescue 1122’s firefighting team arrived at the scene immediately and extinguished the fire as the bus service remained halted for about 30 minutes. The wreckage was removed from the main route with the help of a crane and the serviceable bits were moved to the workshop for repairs.

After the damage had been controlled, the next bus picked up the stranded passengers and dropped them off to their respective destinations. The Metro Bus Authority (MBA) representative issued an official statement shortly after, stating that an investigation team will investigate the matter to find out the source of the problem. The representative also promised to take strict action against anyone responsible for the error.

According to an earlier report shared by Dawn News, an anonymous senior official of Metro Bus Authority (MBA) stated that the buses are not being maintained properly. He also highlighted that the track from Saddar to Faizabad has also been worn out, yet no efforts are being made to maintain the track.

“A major accident could take place if Punjab government does not release funds to start its renovation work,” he had urged.