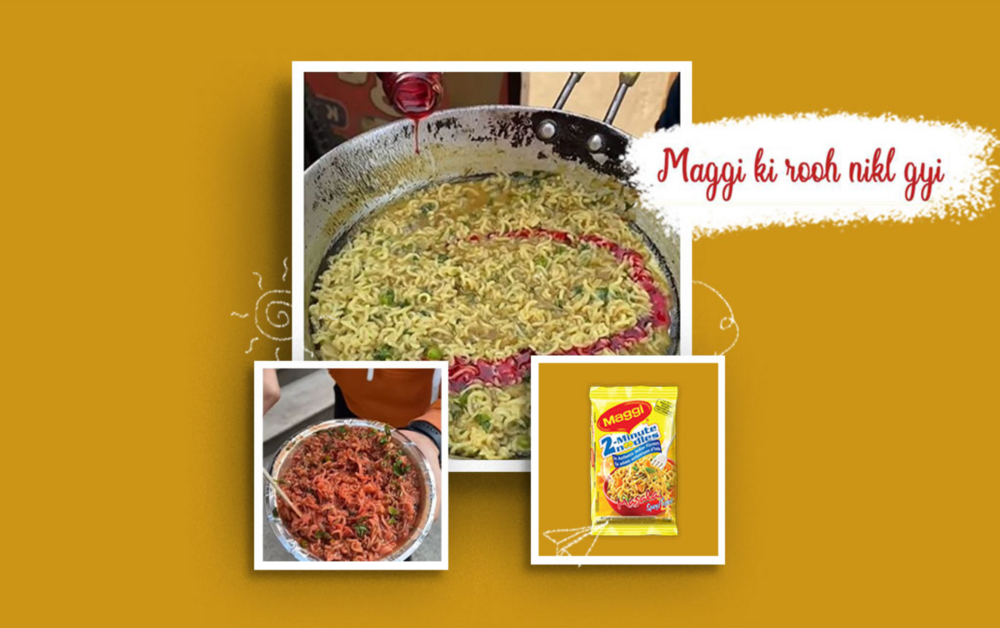 Just when we thought 2021 couldn’t push our limits more, a street vendor in India succeeded in HORRIBLY surprising us. This soul-shattering incident was witnessed in Delhi. A local street food vendor finished off his Maggi noodles by drizzling some Rooh Afza onto them. This took the internet by storm as some foodies could not take the injustice done to Maggi any longer. Maggi, being a favorite local snack in India has suffered many blows in the name of “food experiments”. The foodies claim that this experiment is far worse than Chocolate Maggi, Fanta Maggi, and Maggi Laddu combined! And to be honest, it is hard to deny that.

Maggi has been the ultimate savior whether you wake up for a midnight snack or have to grab a quick meal when you are running late for something. It is a given that the cause of all the “Maggi Suffering” that has ever taken place is the undying love that we have for instant noodles. The masala-coated noodles provide a certain comfort to our senses that no other food can. But we humans can never be content, can we?

The Incident That Left The Netizens Disgusted

The video was shared by a food blogger named Arjun Chauhan on his Instagram profile. The incident went viral in a very short time. This video shows the street vendor shaking up a bottle of Rooh Afza and adding some on top of prepared Maggi. The food blogger then shows the guts to taste this Maggi and his expressions will tell you all that you need to know. People were simply outraged at this gross food combination. These people mainly included the students who are head over heels for Maggi as it is a quick yummy snack that you can always count on.

It is without a doubt that some experiments done with Maggi have been successful and some fusions are bearable whatsoever. But this, in simple words is a little evil. It is like cheating on both Maggi and Rooh Afza at the same time and that is what the food enthusiasts could not tolerate. This experiment is among the most bizarre Maggi fusions that one could imagine.