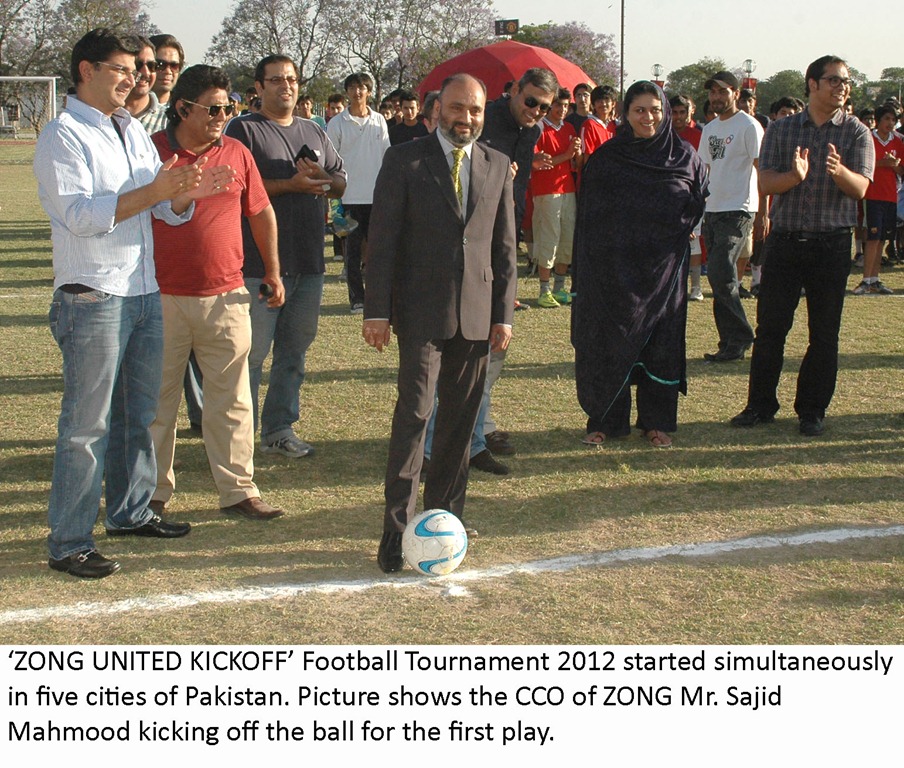 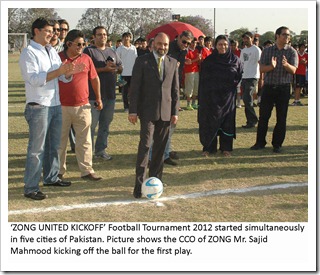 ‘ZONG United Kickoff’ Football Tournament 2012 was launched on Friday, May 4 to great public excitement, simultaneously in five cities of Pakistan.

The tournament is for the selection of 32 young boys who will get trained in Manchester United Soccer School, Abu Dhabi. The CCO of ZONG Mr. Sajid Mahmood kicked-off the ball in Pakistan Sports Complex to begin the tournament.

A total of 128 ZONG registered teams of young boys within the age bracket of 13-17 years of age are participating in this knock-out tournament. Football matches will be held among all these teams and the winning team comprising 16 players will be sent to Manchester United Soccer School. In addition, 16 outstanding players during the matches will also be going to the school.

Commenting at the occasion ZONG’s Chief Commercial Officer, Sajid Mahmood said “This is the biggest activity supporting football in the history of Pakistan. ZONG recognizes that football is possibly the fastest growing team game in the country today in terms of popularity, and is proud to be the pioneer supporter of talent in Pakistan. For us this is much more than just sponsoring a sporting activity. It is about courage, determination, the desire to compete and excel and above all to prove to the world that Pakistan does not lack in talent in any way.”

Previously, ZONG has approached schools to identify schools teams and set-up trial camps to form teams with maximum number of 16 players per team. The teams registered from schools and through trials have now been given the chance to prove their mettle by competing against each other.

These trials were conducted in major cities of Pakistan which includes Karachi, Lahore, Islamabad/ Rawalpindi, Multan and Faisalabad. A team of professional coaches conducted these skill-based trials and selected the best players to form 64 teams, consisting of 16 players in each team.

Manchester United Soccer Schools (MUSS) offer coaching courses for footballers of all ages, backgrounds and abilities, from six year olds through to adults.  ZONG have teamed up with MUSS to offer 32 lucky winners the chance to participate in a 5 day program at their state of the art facility in Abu Dhabi, which will include a series of fun and challenging coaching sessions focusing on a variety of different technical areas such as dribbling, short passing, turning and finishing. The program will also look to develop the young players in other fields, such as tactical understanding, and mental, physical and social growth.