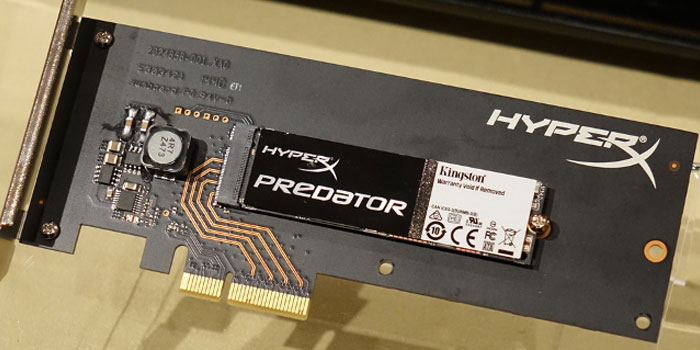 While Samsung and others have already announced the high speed next-generation PCIe SSDs, it is Kingston with its HyperX Predator M.2 SSD which will be the first wide-scale commercially available SSD to use this tech. It is still in its nascent stages and as you would expect, isn’t cheap.

The new SSD can reach sequential read and write speeds of a mind-boggling 1400 and 1000 Mbps respectively. That still lags Samsung’s solution which stands at 2.2 Gbps though.

You also have up to 130,000 and 118,000 random read/write IOPS and a respectable rating of 1.7 drive rates per day. Thanks to the Marvell 88SS9293 controller, the amount of heat released is minimum so there will be no overheating issues.

The SSD slot will only work on an M.2 SSD adapter, which Kingston can sell you separately for $10 if you don’t one.

Finally, the price which is almost twice that of a regular SSD. The base 240 GB drive will cost you $230 while the top-end 480 GB version will be available at an eye-popping $460, which means it will be nearly $1/GB. That’s a lot for the amount of storage which you’ll use up in no time but as time goes on and Samsung and other companies’ products start hitting the market, prices will gradually come down too. As for now, the HyperX Predator is your only bet.