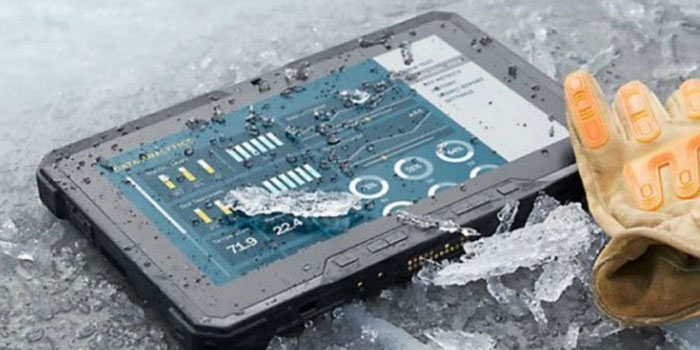 If you are one of the five people on Earth who take their Windows tablets to uncharted waters, you are in luck as Dell has announced the new Latitude 12 Rugged Tablet which comes with Windows 8.1 pre-installed.

Along with it, you get an Intel Core M Broadwell processor, 512 GB worth solid-state storage (expandable via microSD) and up to 12 hours of battery life. (Batteries are removable, too). You also get QuadcCore thermal management for better operations in extreme environments.

For connectivity, Wi-Fi 802.11ac is onboard, so will be optional LTE, Bluetooth 4.0, NFC, microHDMI, USB 3.0 and dedicated GPS. Furthermore, you’ll get a pogo-pin docking interface for accessories.

There is an optional keyboard accessory which comes with a customizable RGB backlight and water and dust-resistance thanks to IP-65 certification. Further accessories include a fingerprint scanner, barcode scanner,magnetic strip reader, Ethernet jack and further USB 3.0 ports.

Obviously, Dell doesn’t expect the general public to buy this tablet in hordes, and is targeting it for “military, emergency response, public safety, industrial work, scientists and even adventurers”. Hence, the $1,600 pricing with 4 GB RAM and 128 GB storage. it will be available starting from July.