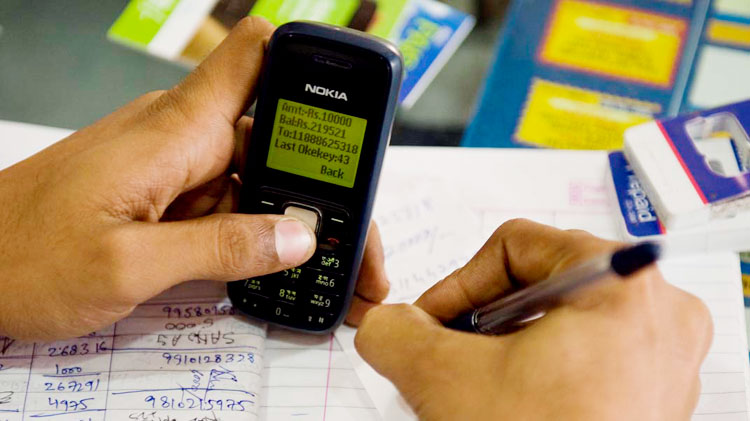 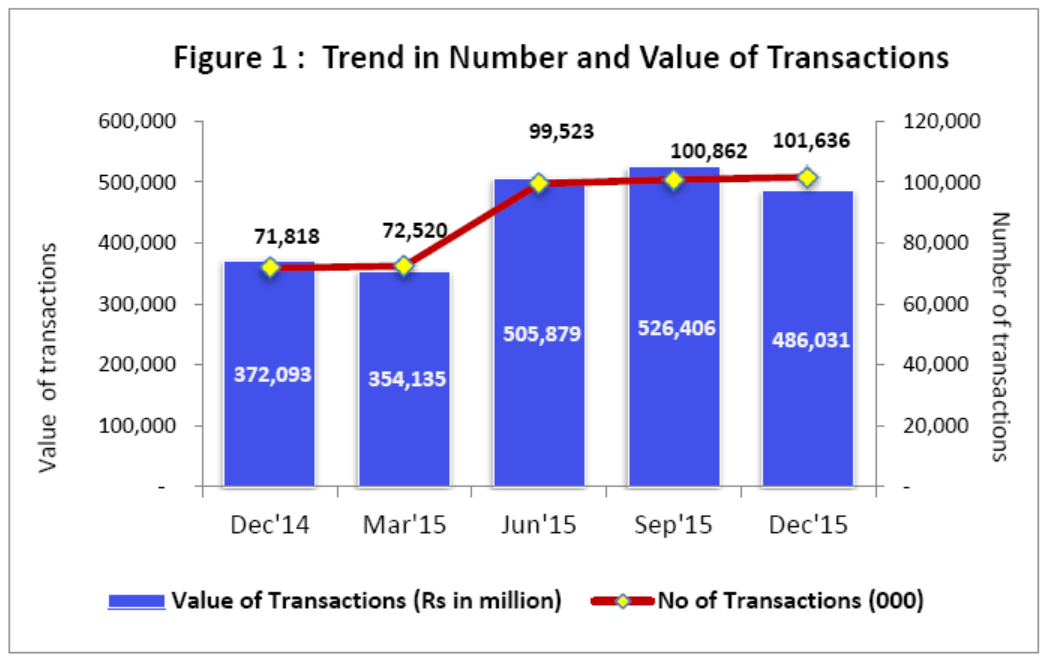 The average size of transaction also declined from Rs. 5,219 during July-Sep 2015 quarter to Rs. 4,782 during the period under review showing an 8% negative growth.

This decline/slow growth in number of transactions and value of transactions is a sign of worry for the sector as financial institutes were apparently unable to attract new acquisitions lately.

This also shows that sector has stagnated in terms of service offering or the innovation in products, causing no further stretch in customer base during past one year or so.

State bank of Pakistan said that there is a promising shift within the transactions from OTC to m-wallets.

During the quarter, the ratio of m-wallet to OTC customer oriented transactions increased by 3%, reaching 34%, from 31% recorded in the previous quarter. 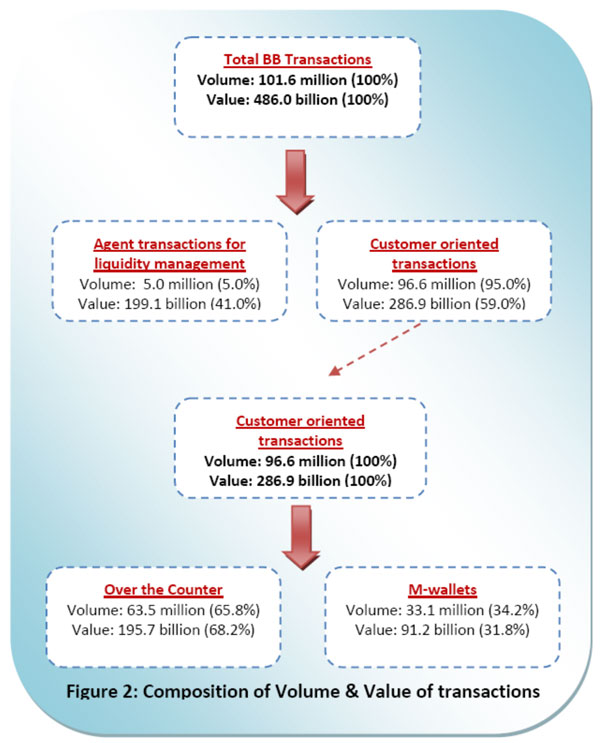 The customer oriented transactions witnessed a 10% decline in value, falling from Rs. 318.5 billion to Rs. 286.9 billion. This was attributed to a sizeable decrease of Rs. 22 billion in utility bills payments, Rs. 8 billion in person to person transfers and Rs. 1.7 billion in G2P payments.

On the other hand, the cash deposited in m-wallets and wallet-to-wallet transfers exhibited a quarterly growth of Rs. 2.2 and Rs. 2 billion respectively. 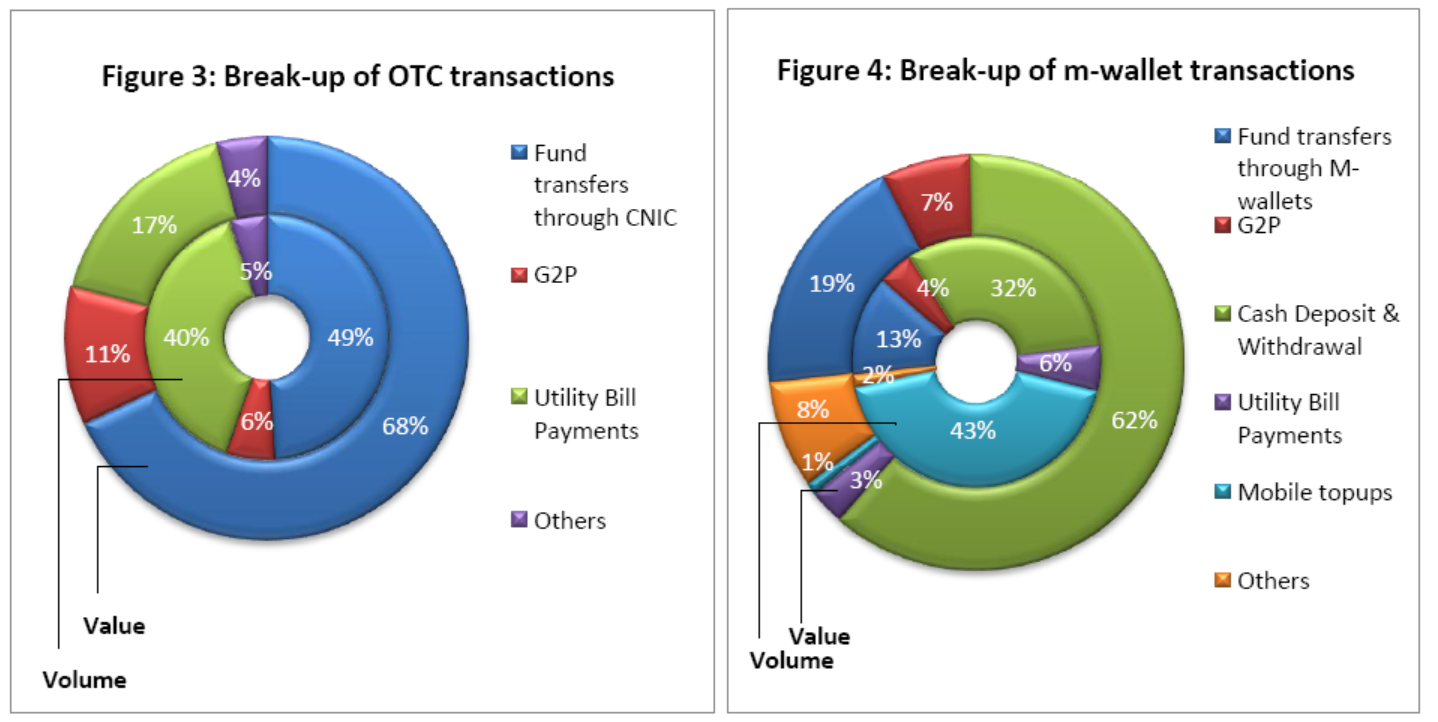 Easypaisa still remains at top for variety of indicators in branchless banking sector, however, MobiCash — now called JazzCash — is fast catching up the market leader.

For active mobile accounts JazzCash is in fact the leader with some 48% market share. More details in below graphs:

If we look at number and value of transactions, Easypaisa easily leads the competition with a good margin. JazzCash is second runner while UBL’s Omni stands at third slot.

Interestingly both EasyPaisa and JazzCash lost its market-share to UBL Omni and other players including UPaisa during the last quarter of 2015.

For agents and active agents, Easypaisa leads the market with not much difference from JazzCash, indicating that EasyPaisa is leaving the door wide open.

Going forward, it would be important to understand the needs of the low income segments to develop appropriate products for the target demographics.

State bank advised that the focus should be on adding value to the branchless banking channel and drive usage in additon to access.

“Though a few players are actively working towards this end, a concerted industry effort will be paramount in order to increase adoption of the BB channel for unprecedented advancements for financial inclusion in the country”, said state bank in its quarterly report on branchless banking.