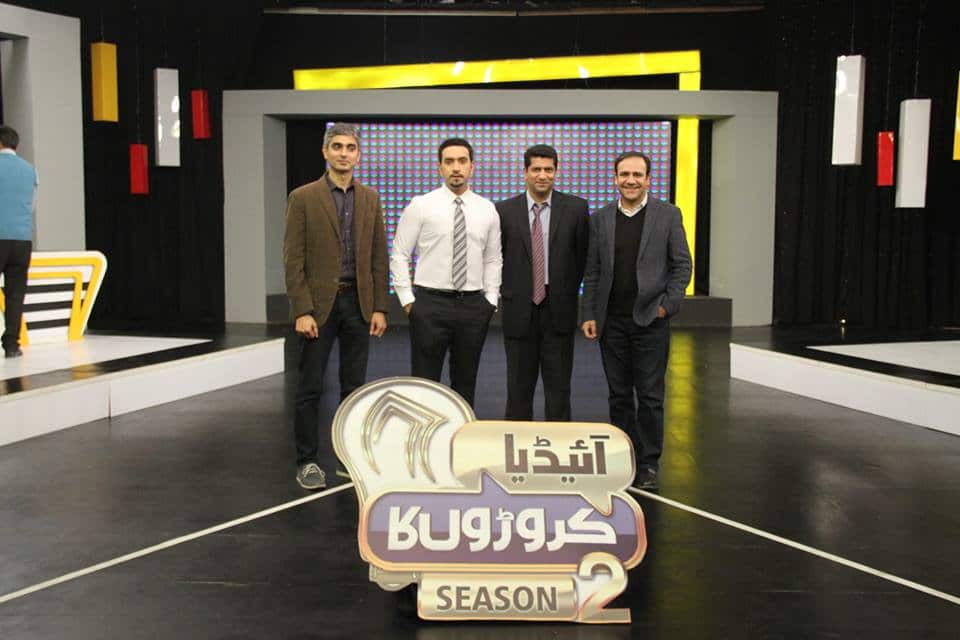 Luckily we were able to watch another episode of Idea Croron Ka despite all the challenges that the team had to face.

This episode was recorded when Lahore was shut down because of an ongoing protest. Despite all the hardships the leading host Nabeel A. Qadeer, Expert Business Advisor Dr. Umar Saif, investors Abbas Yousafzai, Co-founder and CTO at YotaScale and Monis Rahman, Founder at Rozee.pk not just made it to the set but also recorded 2 episodes that day.

Suneel Munj was supposed to be the 3rd investor but he unfortunately couldn’t make it on the day but the entire team’s enthusiasm and commitment to promote entrepreneurship in the country is commendable.

Well, moving on to the episode, Nabeel opened the show with sharing a stat that about 60 million people use smart phones and around 50 million people are internet users, hence highlighting the potential that lies in this domain and also bringing attention to the underlying aim of this show which is to encourage young entrepreneurs to make use of these opportunities.

The first startup that pitched was Greenovation. Their idea is to convert plastic bags into LPG. Their unique selling proposition is that they are using non bio degradable waste for this. To set up this plant and its components they require Rs. 2 crore for which they were willing to give 10% equity to whoever invests in them.

Investors asked questions like what is scientific proof behind this product, what is the production capacity, total cost of this production, what will be the use of investment and how will they be able to set up this plant?

Monis suggested it is better to go for a partnership with an industrial unit to save cost of license and production. The investors thought the idea is too good to be true.

Abbas wanted them to have some patent for them to prove their worth. Monis thought for him it is too high risk for him as he has no expertise in this area and also obtaining the license and installation and maintenance of plant is something he is not convinced with. Dr. Umar Saif advised them to decide whether they are intellectual property company i.e. do they have a patent for innovatively using a technique that hasn’t been used before or are they a plant manufacturer.

So he advised them to go for the former one because a venture capitalist would be interested to invest in that. Nabeel closed this segment promising that if they are able to make a breakthrough after testing it outside the lab environment, Idea Croron Ka will bring them back.

Nabeel introduced Abbas Yousafzai, co-founder and CTO at YotaScale as the superhero for the next segment saying he is one person who is a friend of many in the tech industry and who is of those people who could have easily settled abroad but they came back to work for Pakistan.

He has built 2 companies; Conrad Labs (valuation is around $5 – 10 million) and YotaScale (valuation ~$20 million) through which he has served numerous companies all across the world operating from Pakistan.

Abbas explained what brought him back saying he was upset to see that people abroad thought Pakistan is like a body shop where you pay and person and get him to work for you. He came back to change that thought process and work towards making people entrepreneurs so rather than seeking jobs they create jobs for others.

Nabeel shared that Conrad Labs had gained so much importance that at that time, people in Pakistan used to look forward to getting a job there since they were so highly paid. Nabeel asked why was that the case to which Abbas beautifully said that their core value was not to make money but to make people.

Dr. Umar Saif became curious to meet him and after that meeting he claimed that Abbas indeed is more intelligent than he is. Dr. Umar Saif also said that he has no doubt in the fact that Abbas and his co-founder Asim will make YotaScale a billion dollar company.

Dr. Umar Saif beautifully added here: “Abbas is an inspiration for many and this is the message this show gives to the youth that you can change the fate of this country if you aim higher and effectively execute an innovative idea.”

Monis added that Abbas is truly an inspiration and an asset to Pakistan. Abbas further shared his first experience when he landed in New York and how he couldn’t find water and a place to stay. Despite all these hardships he today stands successful.

This was followed by another pitch by startup Exam Bites; an ed-tech startup that is working on making schools’ course curriculum interactive through animations.

They asked for Rs. 70 lacs for 15% equity. While all these animations are available on internet as well, but Exam Bites wants to integrate it in schools so they are not distracted by other stuff on internet.

Their target market is students of class 9th and 10th. Investors asked questions like why would a school partner with them, have they integrated this system in any school, how will the quality of content be tested and how much money is required to develop the content. Abbas wasn’t satisfied with the answers he got for his questions.

Dr. Umar Saif advised them to focus on the quality of content and produce content like no one else but he also had questions on unit economics of the startup. Monis was also not convinced with the economics of this startup.

The pitch ended with Dr. Umar Saif inviting the founders to come and meet him and maybe find synergies with the e-learn content they are creating.

Nabeel ended the show inviting entrepreneurs to gather learnings from the startups, investors and business advisor: “What is that one thing that makes you unique from others and makes you investable? This is one of the many things that entrepreneurs can learn from the show.”

Keep watching the show every Saturday at 7:05 pm on NEO TV Network. Watch the complete episode on the link given below: