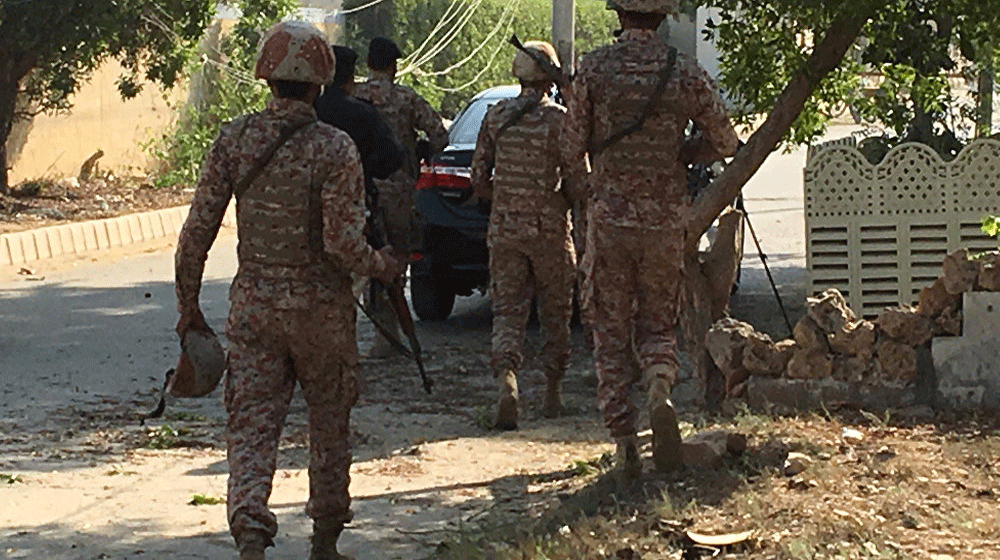 Early on Friday morning, the Chinese consulate in Karachi’s Clifton came under attack by unknown gunmen.

In order to secure the area, the local Police, as well as Rangers, are currently conducting a combing operation.

So far two terrorists have been killed. Sources say that the Baloch Liberation Army (BLA) has claimed responsibility for the suicide attack.

According to Police officials, up to four gunmen tried to break into Chinese consulate early on Friday, they injured an on-duty security guard. The police acted promptly and tried to intercept the attackers in the lobby of the consulate, two police jawans were martyred during the face-off.

Police party kept the attackers engaged in the lobby and until the Rangers arrived on the scene. The exchange of fire continued for almost an hour before all the attackers were taken down by the police and Rangers. All the consulate staff has been marked safe as no attacker could reach the compound.

Police officials now say that the attackers failed to enter the compound of the Chinese consulate. “There were three attackers who have been killed. They tried to enter the visa section but could not succeed,” said Dr. Amir Shaikh, Karachi police chief.

Jinnah Hospital’s spokesperson Dr Seemi Jamali has confirmed they have received two bodies (of the policemen) and a critically injured security guard who is getting medical attention.

Heavy contingents of police and Rangers are now guarding the area of the incident and all the roads leading to the consulate have been cordoned off. Police are carrying out a search and combing operation inside and around the consulate.

Military’s media wing, Inter-Services Public Relations (ISPR) has confirmed that all the attackers trying to barge into the Chinese consulate compound have been neutralized and the situation is now under control. According to the ISPR statement, all Chinese staff was safe as no attacker was allowed to reach the compound.

Karachi Saved from a Massive Plot