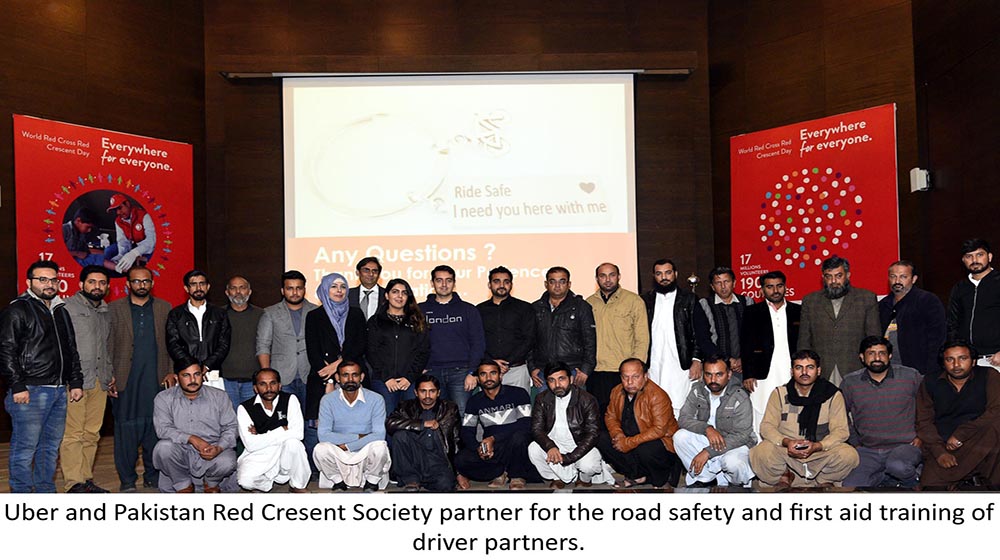 Uber Pakistan, the smartphone app that seamlessly connects riders to drivers, will partner with Pakistan Red Crescent Society (PRCS) with a core focus on road safety and first-aid training for its Driver Partners.

These highly valued trainings ensure the effectiveness for saving lives in any minor or major accident(s), emergencies and/or disasters, whether you are at the office, home or traveling. Moreover, the certification is valid in 196 countries in the world. Driver Partners will be awarded participation certificates towards the end of the training.

Safety is paramount for all at Uber, which can be seen through various brand campaigns held and initiatives taken over the years, including background checks, anonymization, SOS button and more, with a major focus on rider safety and welfare this year.

Safety is of paramount importance to Uber across all our operating cities. We will continue partnering with organizations like Pakistan Red Crescent Society to ensure our driver partners are aware of various safety protocols, which might come in handy during times of emergency.

The need to focus on rider safety arose via Uber’s various marketing campaigns which led to the company’s search to find the best organization to help them with their cause. After much deliberation, PRCS was chosen.

Founded in 1947 under the Red Cross order, both the Red Crescent Movement and the International Committee of Red Cross (ICRC) are the largest humanitarian organization in the world, with close to 97 million volunteers.

PRCS has been engaged in relief operations since its foundation few to mention are; distribution of relief items to refugees in 1947-48, exchange of 10 million family messages during and after the Indo-Pak wars of 1965 and 1971, rehabilitation of flood victims in 1974, health relief for Afghan refugees in 1981, relief worth Rs. 6.7 billion were provided to over 3.4 million affectees of major earthquake in 2005. Between 2005 to 2017, PRCS responded to 28 major disasters in the country and provided relief to 11 million beneficiaries, worth Rs. 24.5 billion.

In the past years, Uber partnered up with ICRS as part of their Rasta Dein: “Give Way To Ambulance” Campaign as well as various blood donation campaigns and now, Uber will be partnering up with PRCS to continue this tradition.