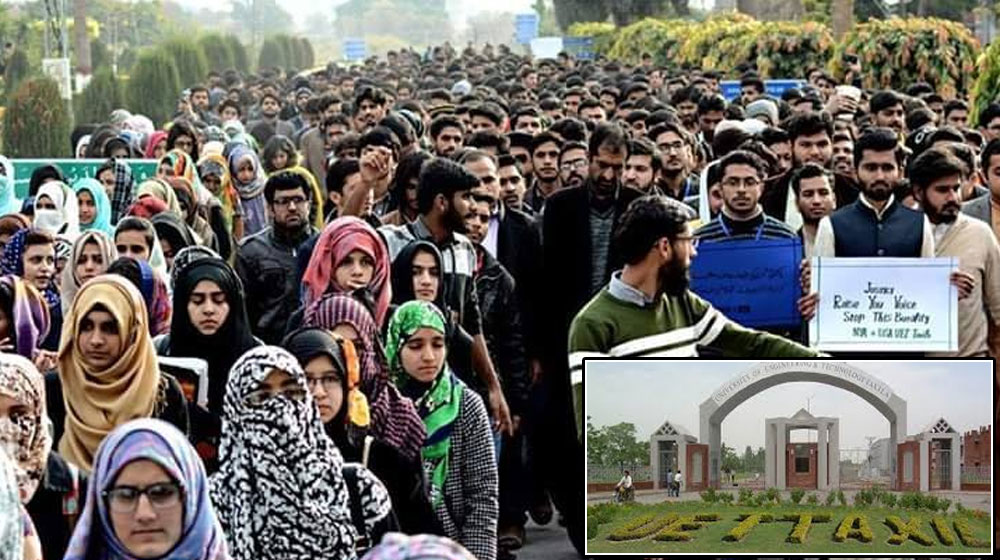 Students of the University of Engineering and Technology(UET), Taxila Campus, have called off their protest and agreed to take examinations after successful talks with the newly appointed Vice-Chancellor (VC).

UET Texila is among the most prestigious engineering varsities of the country but had been deprived of a VC for more than a year. This led to an administrative crisis at the university and attracted protests from the students but fell on deaf ears.

Things could not settle ideally in the meantime and got worse when two students committed suicides in quick succession at the hostels, and there were no medical facilities available for immediate treatment.

The incident caused an uproar on social media, and #UETTexilaPoorAdministration became a leading trend on Twitter.

This is Disturbing and sad Week for Students of UET Taxila… One Female Students Died on her Bed few days ago and No one Know the Reason.. Even University administrators try to hide the incident and Dr. Of UET said it's a Natural Death.. 👇#UETTaxilaPoorAdmin

UET Taxila stands among the most prestigious university institute in the country. But why isn't the dignity and life of its student considered prestigious as well? Two major cases in a row, where is the administration now?#UETTaxilaPoorAdmin

Authorities must look upon this issue. It's a serious matter in UET Taxila where students are not being provided with health and hostel facilities and they are being heavily charged for it.
It is requested that twitter family should raise their issue. ThankU.#UETTAxilaPoorAdmin

Students there condemned not only the lack of facilities and poor administration but also highlighted the sanitation, institutional politics, and nepotism in the university.

The protest spread to a broader scale last week as students refused to take the semester examination unless a new and competent VC was installed.

The seat had been vacant since the previous vice-chancellor Dr. Niaz Ahmad Akhtar was appointed as the VC of the University of Punjab last year.

Report of the students’ protest reached the federal cabinet, and Dr. Inayatullah Babar was appointed as the new VC for the varsity on Monday.

The new VC held a successful dialogue with the students on Tuesday and accepted all their rightful demands with a written guarantee. Subsequently, students called off the strike and agreed to sit in the examinations starting this Thursday.