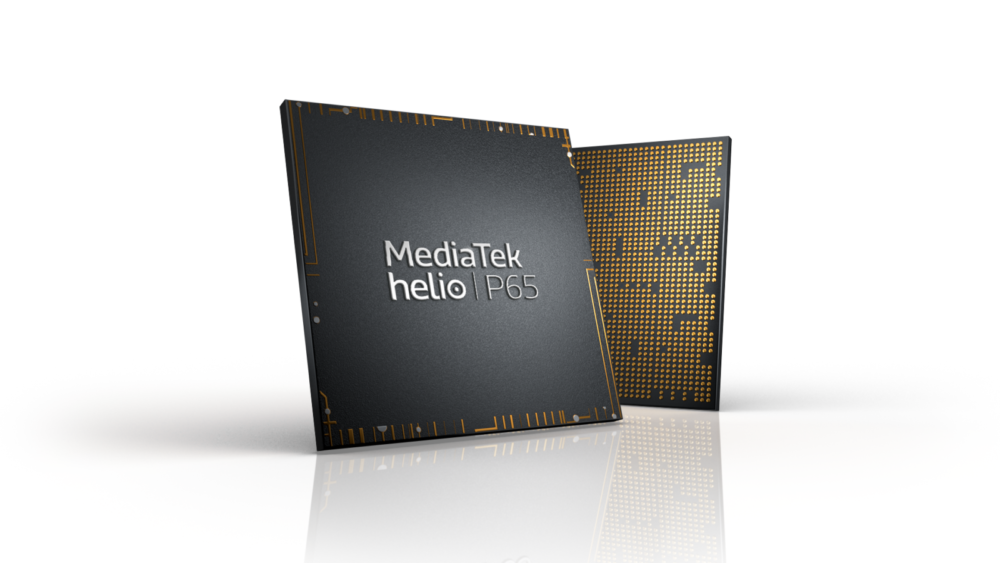 A mixed bag, as far as support/features are concerned.

MediaTek, a Taiwanese chipset manufacturer has just unveiled its mid-tier processor called Helio P65. The new chipset lies between the P60 and P70 and is built on a 12nm process.

This new P-series chipset claims to be 25 percent faster than its predecessor and is also supposed to provide a better gaming experience. With a 100 percent boost in AI performance, it also brings 30 percent improvement AI-assisted camera tasks including scene recognition, scene detection, and application of bokeh effects.

The MediaTek Helio P65 has an octa-core processor that employs two high-performance Cortex-A75 cores clocked at 2.0 GHz and six efficient Cortex-A55 cores. On top of these cores, the chipset sports MediaTek’s own CorePilot resource control system for a better gaming experience.

The graphics will be handled by the Mali-G52 GPU that will operate at a peak frequency of 820 MHz. Compared to the Helio P70, the GPU has dropped to G52 from G72 with the same Bifrost architecture, hence we can expect a drop in the 3D performance.

The Neural processing unit (NPU) installed in the P65 is twice as fast as the P60, according to the claims by MediaTek, as well as 30 percent faster than what we find in the direct competitor chipset.

Here’s how it measures up against the Helio P70.

As far as connectivity is concerned, the MediaTek Helio P65 supports 4G LTE and VoLTE along with Bluetooth 5.0 and Dual Channel Wi-Fi (2.4GHz and 5.0 GHz). Indoor navigation will also improve with the new GNSS engine. The chipset also supports GPS, Beidou, GLONASS and Galileo as well as carrier aggregation with LTE CAT-4, CAT-7 DL/ CAT-13 UL.

Unlike the P60 and P70, the chipset cannot connect to UFS storage, it only provides support for eMMC 5.1 which is a bummer. On top of this, it is compatible with LPDDR3 and LPDDR4x RAM modules of up to 8 GB capacity.

As far as video recording is concerned, the chipset supports 2K video at 30 fps and 1080p at 60 fps. The videos can be encoded in H.265 format as well.

Overall, the features offered by MediaTek Helio P65 are almost similar to P60 and in some cases, P60 is better than P65. We cannot comment on the performance yet, but we do know that it will not be used in any of the premium smartphones.