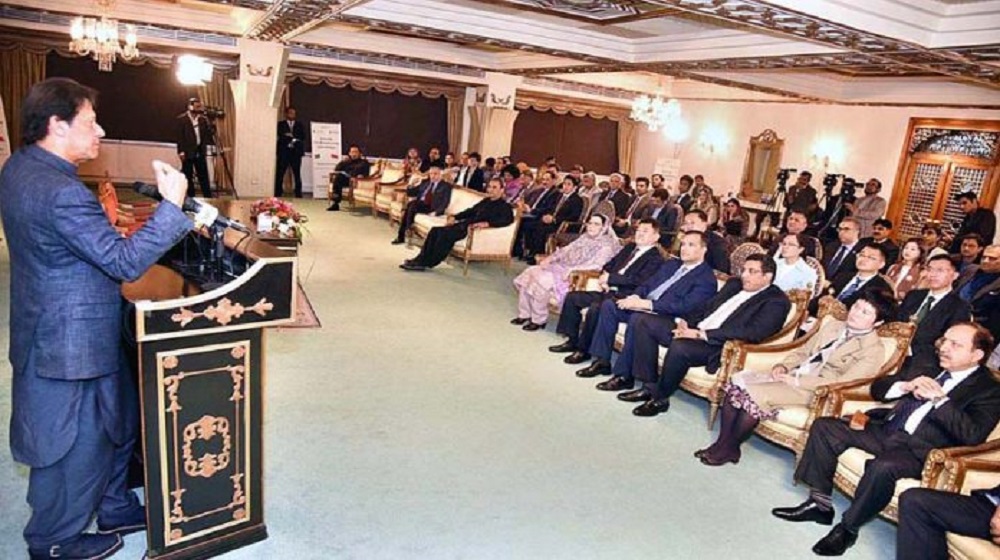 Prime Minister Imran Khan said the government is confident that they will be able to uplift the masses and decrease poverty through wealth creation, tax collection, and industrialization.

Addressing a ceremony to distribute refund cheques among prominent exporters, he said that disbursement of Rs. 30 billion will result in improved cash flow for taxpayers in general and export-oriented sectors in particular. “We will further facilitate exporters to boost the country’s exports,” he added.

The Prime Minister praised his economic team for stabilizing the economy and stated that the rupee has gained value against dollar and trade activities in the stock market are gaining momentum. The Prime Minister said that Pakistani exports have also increased in quantity and all of these culminate in a positive economic outlook for the country.

The continuity of policies is critical for sustainable development and the government is striving to promote industrialization, wealth creation and tax culture to place the country on the road to sustainable economic growth.

He lauded the Federal Board of Revenue (FBR) Chairman Shabbar Zaidi for taking effective steps to improve tax collection.

He added that the current account deficit was the biggest challenge when his government came in power last year, however, he said the efforts of the economic team resulted in the stabilization of the economy. Imran added that for the first time in four years, the country has witnessed current account surplus besides the restoration of the public’s confidence in the stock market and increasing volumes of exports.

Prime Minister criticized previous governments and stated that in the past, the country was run on ad hoc basis. He said his government was inspired by China’s model of economic progress which was based on long-term policies and human development.

The country has rich gold and copper reserves, however, on the other hand, corruption has caused billions in losses to the national exchequer. He thanked Turkish President Recep Tayyip Erdogan for saving the country from the fine imposed by the ICSID in the rental power case and the government is now trying to deal with Rs. 900 billion damages imposed on Pakistan in the Reko Diq case.

He added that as financial loans and aid is not considered good for the dignity of a country, the government is striving to strengthen the country’s economy by promoting tax collection and industrialization.