Deposits of Pakistan banks have grown by 18 percent year on year (YoY) to Rs. 17.9 trillion in 1Q2021 as compared to Rs. 15.12 trillion in the same period last year, according to the latest data released by the State Bank of Pakistan (SBP).

The analyst report by Topline Securities brokerage house has termed this achievement as ‘the highest growth in the March quarter in the last 14 years.

A report released by Topline Securities detailed that this growth in deposits has been fueled by higher remittances that had increased by 29 percent YoY in US Dollar terms and 31 percent in PKR terms during 1Q2021. Additionally, another factor that might have contributed to this increase in the deposits may have been the slowed cash-based business activity due to COVID-19.

On the other hand, investments have grown by 35 percent YoY to Rs. 12.6 trillion in 1Q2021. This excess liquidity is being placed in investments (primarily T-Bills) due to the subdued growth of the Advances.

The Advances grew by four percent YoY (vs. a ten-year average of nine percent) in 1Q2021 as the banks remained wary of the overall economic conditions caused by the pandemic. However, the report added that the sequential growth of 3.5 percent quarter on quarter is an indication of better economic activity during the last few months. 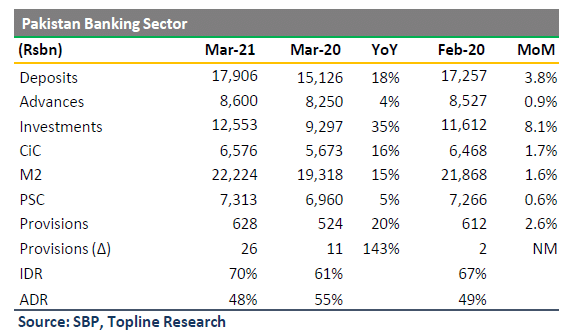 In a nutshell, the deposits showed 18 percent YoY growth, Investments went up by 35 percent YoY, and Advances by four percent YoY in 1Q2021.

The provisioning figures have also shown an increase as the banks became more sensitive to the risks posed by the pandemic. The banks have opted to increase General Provisioning (overall outstanding stock up 20 percent YoY as of Mar-2021) in the wake of the pandemic.

According to the report, fresh provisioning during the quarter stands at Rs. 26 billion as compared to Rs. 5 billion in December 2020 and Rs. 32 billion in the September 2020 quarter.

Going forward, the deposit growth is projected in the range of 12 to 14 percent during the second quarter of the current calendar year, according to Topline Securities. “We expect Advances to grow by around 5 to 7 percent, where banks are expected to remain risk-averse given concerns over further waves of COVID-19,” it said.