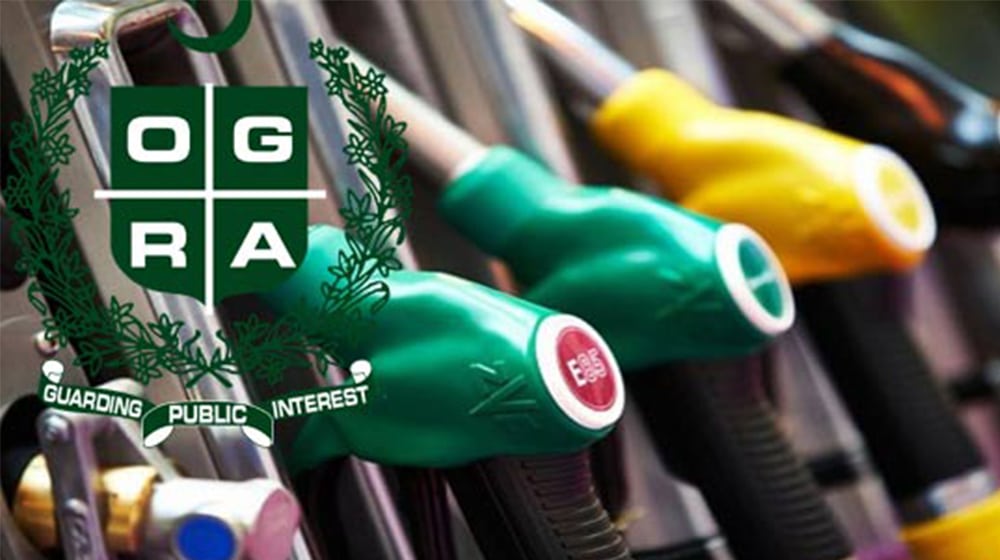 The Oil & Gas Regulatory Authority (OGRA) of Pakistan has issued its ‘State of the Regulated Petroleum Industry’ report for the fiscal year 2019-20.

Pakistan’s oil sector has faced major challenges due to the unprecedented crises caused by the COVID-19 pandemic. During the fiscal year 2019-20 (FY20), the import of crude oil and petroleum products had declined by 26.42 percent and 7.60 percent to 6.77 million tons and 8.10 million tons respectively as compared to the previous year’s imports of 9.21 million tons and 8.77 million tons. 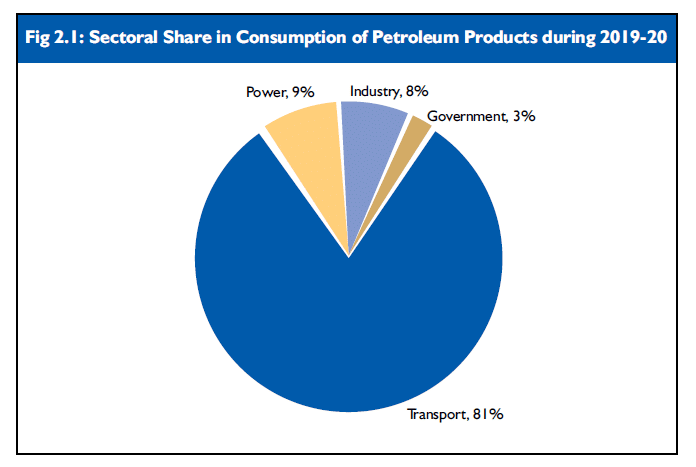 The consumption of petroleum products in the power sector had suffered a huge decline of 43.5 percent to 1.52 million tons during FY 2019-20 as compared to 2.76 million tons during FY 2018-19 due to the shifting of power generation from FO to RLNG, followed by the government where consumption had declined by 10 percent, transport by 5.6 percent, and industry by 5.5 percent.

In the marketing arena, energy products had a change in the market share as compared to the previous year. PSO had been the major shareholder with the highest market share and had gained around three percent (from 41 percent to 44 percent) during FY 2019-20.

Hascol had lost around four percent market share from 10 to 6 percent. 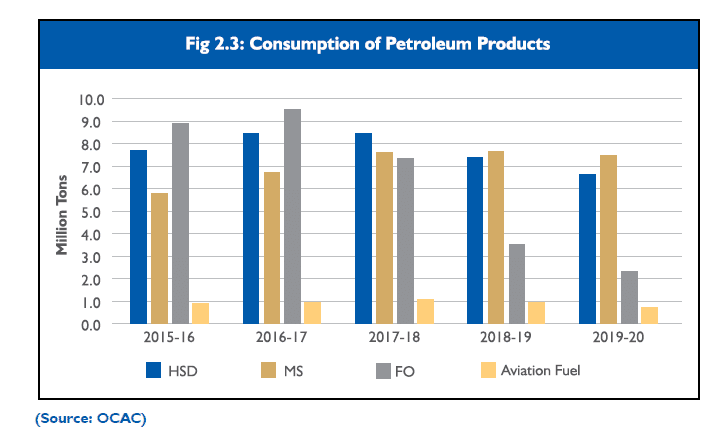 Natural gas is a major contributing fuel to Pakistan’s energy mix. The demand for natural gas, particularly by the residential, fertilizer, and power sectors has also increased over the years, putting more pressure on the limited indigenous gas supplies.

The deficit between production and consumption had been met partially through RLNG imports whose share in natural gas supplies has increased from 27 percent to 29 percent during the current financial year.

Pakistan has a huge transmission network of 13,452 km and a distribution network of 177,029 km gas pipelines that provide natural gas to the domestic, industrial, commercial, and transport sectors.

The gas utility companies have expanded their transmission and distribution networks to cater to the demands of their new consumers. The SNGPL and the SSGCL had extended their transmission networks by 190 km and 72 km respectively during FY 2019-20. Similarly, the SNGPL had extended its distribution network by 5,731 km, and the SSGCL by 527 km during the same period. 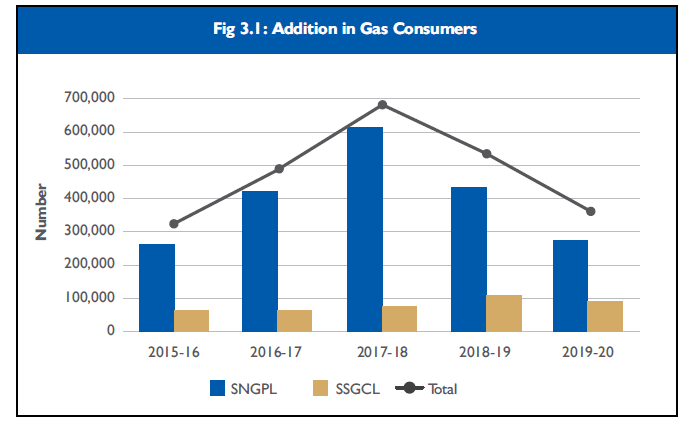 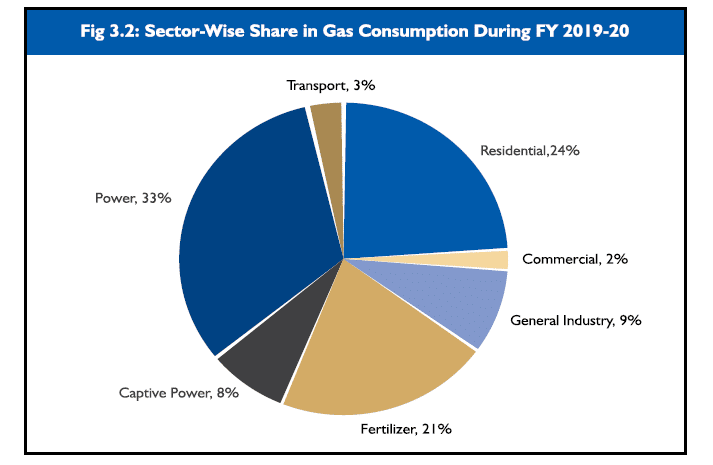 The supply of natural gas supply during the year had been 4,052 MMCFD and was mainly contributed by the major gas fields Mari, Sui, Uch, Qadirpur, Kandhkot, and Maramzai. Of the total supplies, 1,057 MMCFD of gas had been supplied by the gas fields/producers directly to their consumers and the remaining through gas utility companies.

The LPG share in Pakistan’s primary energy supplies is around one percent. The current size of the LPG market is around 1,149,352 MT/Annum, which is 8.28 percent higher than last year’s 1,061,448 MT/Annum.

LPG consumption in the industrial sector had declined by eight percent (from 200,583 to 184,328 M. Tons) during the same period. Refineries, gas-producing fields, and imports are three main sources of LPG supply in the country. 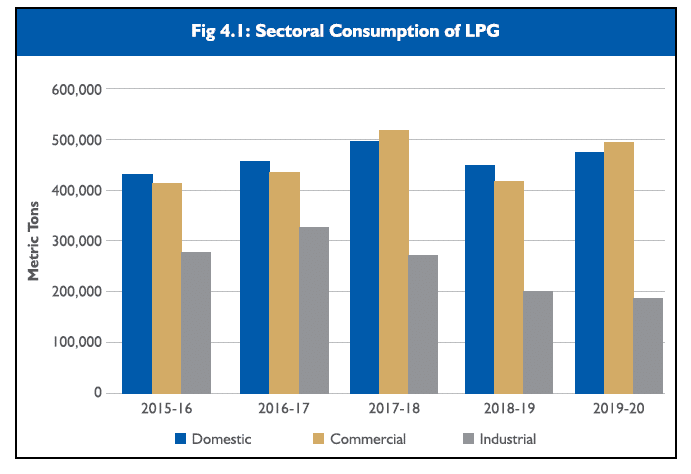 The production of refineries and gas fields had accounted for 68 percent of the LPG consumption, whereas the remaining 32 percent had been imported during FY 2019-20. LPG supplies had increased by four percent during FY 2019-20, mainly on account of a 39 percent increase (from 252,467 to 350, 096 M. Tons) in LPG imports as compared to last year.

There had been 11 LPG producers and 208 LPG marketing companies with more than 7,400 authorized distributors by the end of FY 2019-20. Furthermore, there had been 22 operational LPG auto refueling stations within the country.

Liquefied Natural Gas (LNG) is natural gas that is cooled and converted into liquid at a temperature of -162°C (−260°F) and atmospheric pressure. Liquefaction reduces fuel volume by about 600 times and allows it to be stored and transported in specially designed vessels.

In an effort to bridge the widening natural gas demand-supply gap in the country, the first LNG re-gasification terminal had been commissioned in March 2016 and the second LNG terminal was commissioned in April 2018.

The government has mandated the state-owned companies Pakistan State Oil (PSO) and Pakistan LNG Limited (PLL) to import LNG on its behalf. PSO has signed a Government-to-Government contract with Qatar Gas for a period of 15 years, whereas PLL has shorter-term LNG contracts with Gunvor and Shell.

LNG imports during FY 2019-20 had declined by five percent quantum-wise to 857 MMCFD from 901 MMCFD in FY 2018-19, but its share in the overall natural gas supplies had increased from 27 percent last year to 29 percent as of now.

The OGRA has played a vital role in the promotion of CNG in the transport sector and the setting of higher standards for the safe operation of CNG stations.

The use of CNG as an alternate fuel in the transport sector has helped to reduce air pollution to a considerable extent, which also includes excessive suspended particulate matter (SPM) emitted from public transport vehicles and private vehicles.

The OGRA has always prioritized safety and quality with regard to the certification of local and foreign CNG equipment.

Furthermore, in order to promote the indigenous production of CNG equipment, the OGRA has granted permission for the manufacturing/assembling of CNG Compressor, Dispenser, and Conversion kits for vehicles subject to the conformity of the laid down international technical standards.