The writer is a freelance journalist and writes on various topics. 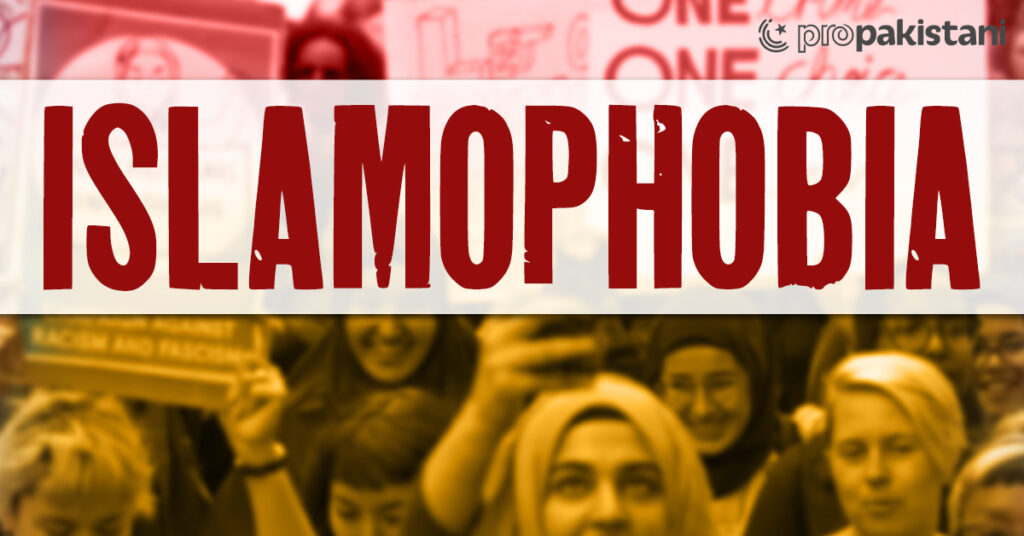 “Deliberately insulting religion and religious beliefs provokes hatred, leading to further polarization and fragmentation of humanity.”-Imran Khan, Prime Minister Islamic Republic of Pakistan. Islamophobia, the most significant 21st century challenge, was first coined in 1901 in France. The term pronounces ‘a fear of Islam’ in the Western societies. After the cold war in 1993, discussion on Islamophobia increased in academic, public and at official discourses. An American historian, Samuel P. Huntington wrote an article, “Clash of civilisations” which prompted militant Al-Qaeda to declare Jihaad (War) against West, especially America resulting in plenty of terror attacks in the different parts of the Globe.

Right here! Let us dive deep into the roots of the rising Islamophobia. The first and the foremost cause of upsurge was Huntington’s theory of Clash of civilisations. In his theory, he argued that “Islam is inherently anti-West and Islamic civilisation is a threat to western civilisation.” According to Huntington, Western civilisation consists of democracy, liberty, norms, values and human rights, indicating Islamic civilisation as undemocratic, uncivilised and one that does not care about human rights, norms and values. His theory set the very foundations of Islamophobia and the spill over effect was transmitted to the public through media.

Secondly, America’s war on terrorism after 9/11 added fuel to the fire. Post 9/11 world saw a radical shift. America declared war against Islamic radical organizations. It attacked Afghanistan and Iraq along with it’s allies and the coverage of these attacks was done in a way that reflected a perception that perhaps these people, terrorists who maintain the veneer of Islam, are the real of face of Islam. As a result, Western societies started building a narrative that that Muslims are somehow what Huntington suggested, i.e. uncivilised, undemocratic, does not care about human rights, norms and values. Some American researchers also acknowledged this narrative building that Islamophobia sentiments surged after 9/11. Hatred, prejudice and violence against Muslims started developing. War on terror was generalized that all Muslims or Islam as a whole is like this. A bigger misperception.

Thirdly, evolution of West contributed towards Islamophobia. Economic development made those States a model of prosperity and champions of democracy. These events were followed by increased globalisation, invention of effective mediums of communication and media’s coming at the forefront. Muslim societies began to think “West” is the destination for better future, healthy economic life and a guaranteed security. Consequently, migration of Muslims towards West commenced. However, migration had some serious repercussions. For the first time, Western society got the chance to witness Muslim culture. After this cultural exchange, Muslim culture went to the West, some segments of the Western and Muslim society were unable to reconcile their cultural norms, resultantly, Muslim culture was ridiculed and was considered as a threat to the Western culture, contributing towards Islamophobia.

The last and mother of all causes, the role of western media in promoting Islamophobia. The West media has been playing a very biased role, reporting some terrorist attacks in a partisan way. A lot of universities, researchers and international scholars have proved this biasness and this biasness promotes Islamophobia.

Yet it is not always too late. The course can be corrected and this misperception can be eliminated. And for this to happen, number one thing that Muslim States should do is they must educate Western societies, particularly Muslims societies living there, about multiculturalism. The Western societies need to be educated and informed that Muslims are may be different but not anti-West, at least not all of them. On the other side, Muslims should also be educated that Western societies are culturally different and their being different does not warrant you a violent response.

Moreover, Muslim States need to deradicalize their youth. They must preach true Islamic values of peace, love and harmony to the youth. Preaching true version of Islam can prevent Islamophobia. In addition to this, the positive role of media is of paramount importance. It must understand the need of objective analysis and objective reporting. Stigmatizing a particular society does not resolves a problem.

Finally, a common viewpoint or voice of Muslim States is the need of the hour. Common condemnation, united and collective diplomatic efforts are desperately needed to counter Islamophobia.

In the end, Islamophobia is the most important challenge not only for Muslim States but also for Western States. It is not coincidental but deliberate and intentional by certain elements who do not want to see peace in the world. As Muslims, it is our responsibility that we must not be used by these hawkish elements present here as well as in West part of the globe. The omens are clear, the world Powers and Muslims States need to heed the real masters.