The first floor was unsealed by the authorities but due to the non-compliance with rules, the CDA chose to keep the basement sealed.

As per the details, due to the mall’s prior non-compliance with CDA building control requirements and fire safety measures, concrete barriers were erected around the mall’s entrance.

The guards were removed, along with the whole administration, by the CDA building control and Islamabad management, who then closed the mall on Monday night.

As per the sources, the mall has been sealed due to its illegal use, and the procedures advised by CDA building control and fire safety have not been implemented while the damage caused by the fire has also not yet been repaired.

Furthermore, authorities instructed the mall’s administration to follow proper fire safety regulations after a fire broke out a few weeks back.

It is relevant to note that the Azad Jammu and Kashmir premier Sardar Tanveer Ilyas, who is also the mall’s owner, criticized Prime Minister Shehbaz Sharif for “not addressing the sacrifices of Kashmiri people” during a speech on Monday, which the PTI said was the reason for the mall’s closure. 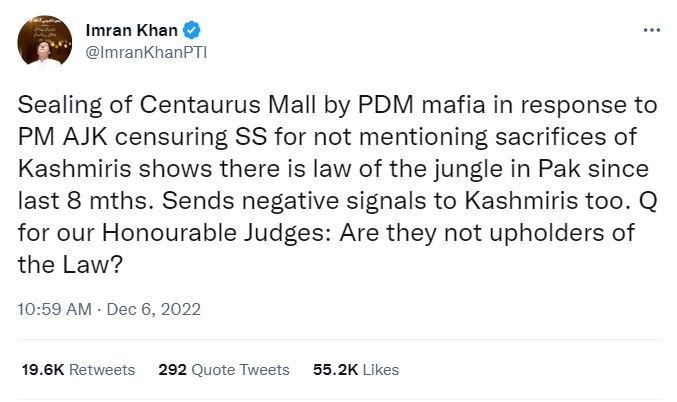 Besides, PTI Chairman Imran Khan also criticized the federal government’s action and referred to it as an instrument of political retribution.

He also stated that such action sends adverse messages to Kashmiris as well, urging judges to uphold the writ of the law.