Long Distance and International (LDI) operators have agreed to set up a system jointly at PTA for Reconciliation of International Telephony Traffic (RITT).

This decision was taken in a meeting held at PTA Head Quarters, presided over by Chairman PTA Dr. Mohammed Yaseen. 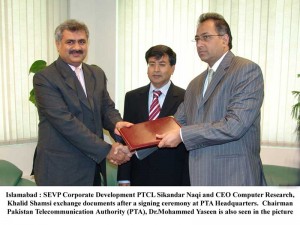 International incoming traffic share of each LDI for the months of April, May and June, 2008.

The funding of subsequent phases would be done by calculating running average of international incoming traffic starting from April, 2008 and extending up to the month when the share is being calculated for new contract.

It was said in the meeting that Monitoring & Reconciliation of International Telephony Traffic Regulations were sent to all stake-holders for their inputs. The regulations were finalized after incorporating the received comments and were approved by the all LDI operators.

The Letter of Intent (LoI) for the expansion project of technical facility to curb grey telephony would be issued by PTCL being the consortium head. The contract for the project would be signed by PTCL or jointly by all LDI operators whichever is decided amongst themselves.