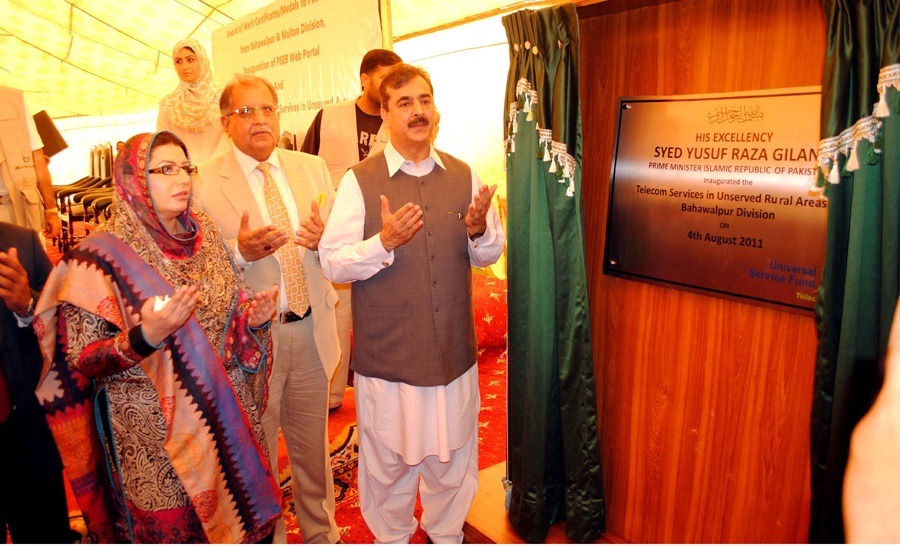 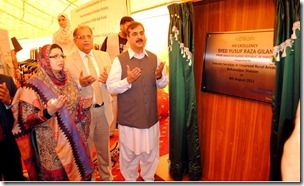 Speaking on the occasion, the Prime Minister said that USF’s project in Bahawalpur manifests the determination of the government to provide basic telecom facilities to remote areas of Pakistan.

He added that when his government took charge in early 2008, there were 888 unserved mauzas in the districts of Bahawalpur, Bahawalnagar and Rahim Yar Khan. Now every village in these districts enjoys basic telecom facilities.

He hoped that PSEB and USF, under MoIT’s leadership, would continue to implement programs to strengthen Pakistan’s IT industry, and increase access to ICT technologies to all Pakistani citizens.

To mark the launch of the USF’s telecom services in Bahawalpur, the Prime Minister unveiled a plaque and made a telephone call at the remote village deep in the Cholistan desert. This project was implemented with a cost of Rs. 310 million, out of which USF contributed 248 million. The project will benefit approximately 250,000 people located in the remote areas of Bahawalpur division.

He mentioned that Ministry of Information Technology, its affiliated companies and departments are conscious of the skilled man power needs of IT Industry and have started programmes for training young IT professionals in advanced IT technologies. He assured the Prime Minister that Ministry of Information Technology would actively work towards realizing government’s vision to develop young skilled professionals, for promotion of the IT industry in Pakistan.

In a statement, CEO OF Telenor- Christian Albech said, “We are proud to have become the only mobile operator to have completed a USF project that comprises a high number of solar-powered sites. We are honored to have provided connectivity to a quarter of a million unserved population of the area, and thus contributed to the socio-economic uplift of the people.”

The ceremony was attended by notables of the area, political representatives and officials of Ministry of Information Technology,USF and PSEB.