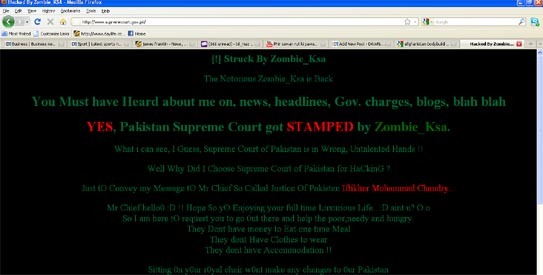 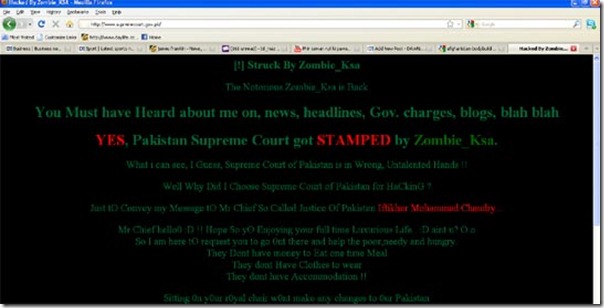 A hacking group named Pak Bugs earlier today hacked into Supreme Court of Pakistan’s website with an ID of “zombie_ksa”.

The hackers, who are apparently from Pakistan, demanded ban on objectionable sites in Pakistan. The hackers threatened to hack the site of Pakistan Telecommunication Authority (PTA), if their demand was not fulfilled.

It merits mentioning here that a kid of 9th grade had earlier written to PTA, ministry of information technology and to CJ of Pakistan to ban objectionable websites in Pakistan.

The hackers, leaving a message on the hacked page, criticized the lavish lifestyle adopted by Chief Justice of Pakistan (CJP) Iftikhar Muhammed Chaudhry. The message further underlined for him to realize the state of people starving of hunger. The hackers urged him to pay heed to such poverty-stricken people.

Reportedly, Supreme Court of Pakistan has taken notice of the incident. They have removed the hacked page while a probe has been initiated to find out the culprits.