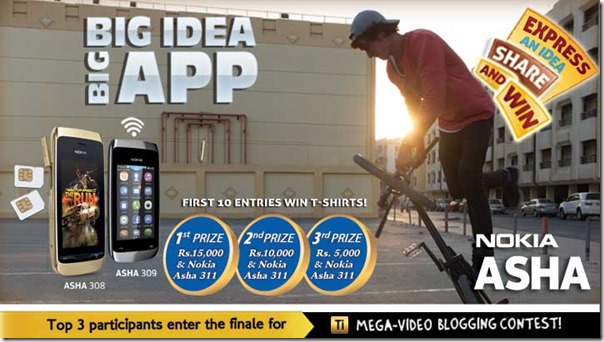 Nokia, as part of its Nokia IdeasProject campaign, has recently collaborated with Talentidols.com to present to cell phone enthusiasts of Pakistan the Nokia Asha Big Idea Big App Competition on the Talentidols portal.

The competition, which was launched on 7th December 2012 gives an excellent opportunity to mobile phone users in Pakistan to present their ideas for Phone Apps (Applications) that would be useful to them, if developed.

Just to let you guys know again, competition is just about giving immensely interesting app ideas, that can be useful for users if developed. This is not the app development competition, in any essence.

With this in mind Nokia & Talentidols have invited users to give their big ideas which could turn into effective Apps, if the idea wins. Apart from this, a number of other exciting prizes are up for grabs through this competition:

Talentidols.com has provided a well maintained platform to run the competition and has already received a number of Cell Phone App ideas that people would like to see developed. With original and creative ideas pouring in from all over Pakistan, this competition promises to be a great success.

So what do you think? Do you have that excellent and inspiring app idea lying at the back of your head since ages? This is your chance to let it out, get it developed by Nokia and win some prizes in the bargain too!

The Nokia Asha Big Idea Big App competition is ONLY on for a month though! If you wish to participate, submit your Cell Phone App Ideas at Talentidols.com by visiting the following link: www.talentidols.com/nokia BEFORE the 10th of January 2013.