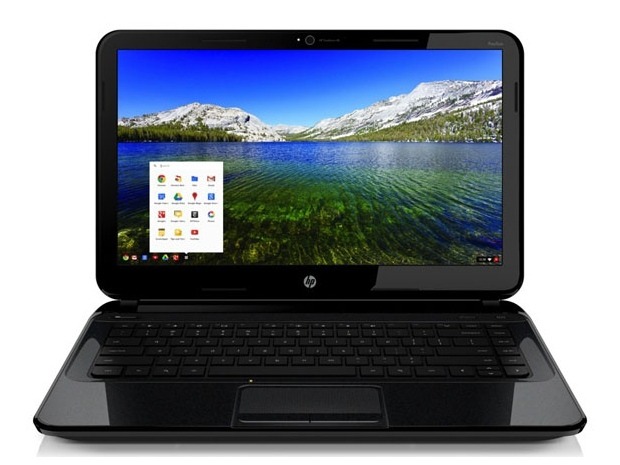 You saw this coming maybe. Like a bunch of their biggest competitors including Lenovo, Acer and Samsung, HP has decided to make a splash in the Chrome OS scene too by announcing the 14 inch pavilion Chromebook.

The Pavilion Chromebook, like its other siblings, is also a budget laptop but offers a bigger screen than most of their other competitors.

Specs are what you’d expect from a budget laptop of 2013, which, I might add runs on Chrome OS and not Windows or Ubuntu. The processor is a 1.1 Ghz dual-core Intel Celeron unit with x86 architecture, which might sound a bit ‘dull’ to some of you. The amount of RAM here is 2GB. The SSD storage you get is only 16GB though.

Fortunately, connectivity package is quite rich with HP Pavilion Chromebook. You get 3 USB 2.0 ports to start with, HDMI port, Bluetooth 3.0, Wifi and even an Ethernet port.

There’s a 2-in-1 memory card slot too. At the front of HP Pavilion Chromebook is an HD camera. The laptop also offers 100GB of storage space in Google Drive for 2 years. Battery life is quoted to last over 4 hours which is a bit low by normal standards.

All this hardware comes in a body which is 0.83 inches thick and weighs 1.8 kgs.

The Operating System and Is it for You?

If are you’re not familiar with Chrome OS, you should know that it is meant to be used with internet all the time. Why? Simple. The OS runs almost all the time on a Google Chrome browser window and you’ll either be using the browser or you’ll be spending your time on web apps, which of course, means web afterall. Hell, you won’t even get a proper desktop and all that amazing, exclusive software you’re so used to using on Windows or Mac? Forget about it.

But to be honest, that mattered most when Chromebooks used to cost over $500 which is a thing of a past now. Spending $500 on a thing that just browses the web might sound wildly insane but the good thing is that Chromebooks cost a lot less now. Acer and Samsung offers Chromebooks for $199 and $249 and this HP Pavilion Chrombook retails for around $329.

You can find some great tablets at this price though and even some Windows netbooks. Chromebooks may browse the web better than tablets, and offers keyboards too but beating the latter seems like a tough task. And comparing Windows software with Chrome web apps will be stupid right? I leave this decision of making this transition to Chrome OS or not to you then.