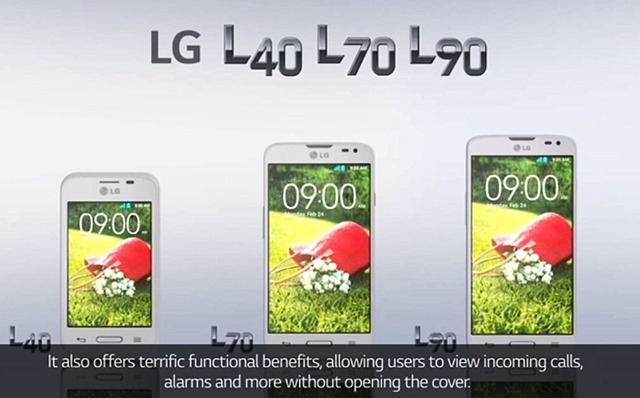 LG has announced three new Smartphones in its Android range under the L Series III banner. The handsets lie in the upper-end, mid-range and lower-end categories respectively and feature design inspired by the company’s premium G series.

All of them come with Android 4.4 KitKat pre-installed which is quite a plus. They are named L90, L70 and L40 based on their importance.

The top-end phone of this lineup comes with a 4.7″ IPS display with qHD resolution. Under the bonnet, you get a 1.2Ghz quad-core processor, alongside 1 GB RAM and 8 GB internal storage, expandable via microSD.

Under the hood, you get a 1.2Ghz dual-core processor along with 1 GB RAM and 4 GB expandable storage. The back features a 5 megapixel camera.

The phone is powered up by a 2,100 mAh battery while it comes with an unflattering 9.5mm waistline.

This phone lies in the bottom-end of the newly-announced range. It packs a 3.5″ display at the front with 480 x 320 resolution.

Underneath, you’ll get a 1.2Ghz dual-core processor with 512 MB RAM and 4 GB expandable storage. At the back lies a lonely 3 megapixel cameras.

While the phones feature nothing particularly earth-smashing, if priced appropriately, they might open a new outlet for entry into the smartphone market. And don’t forget that LG is the exact company that brought us the last two Nexus phones.