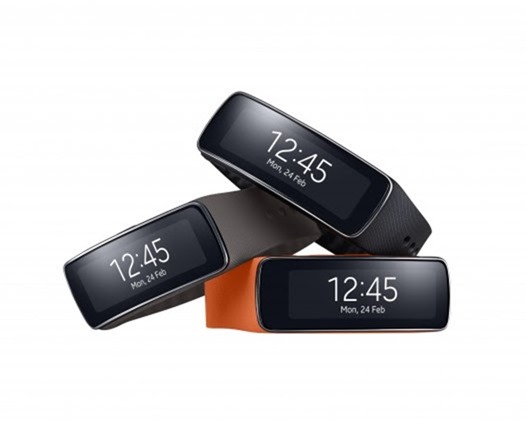 Anyone who thought Samsung has had enough with wearables at the MWC was wrong. There is indeed a third Gear, called the Gear Fit.

The wearable is aesthetically the most-pleasing of the lot. Its 1.84″ rectangular curved AMOLED display gives it a touch of the future. The resolution is quite modest at 432 x 128. It comes in three different colours with changeable rubber straps and weighs just 27g.

Just like the Gear 2 and Neo, the Fit also runs on Samsung’s new Tizen OS. Samsung has paid some special attention to make the device a perfect fitness tracker. You get a built-in heart sensor, pedometer and step-counter.

The Fit can’t take calls but it does display your notification on your wrist. It also syncs with the Galaxy S4’s S-Health app.

Connectivity is done with Samsung phone via Bluetooth 4.0. (Sorry, no NFC.)

Finally, just like the Gear watches and the S4, the Fit is IP67-certified, which means water-resistance for up to 30 minutes under a meter of water, apart from dust-resistance. Battery life is said to last up to 4 days.

The Fit is said to be released in April but pricing details aren’t revealed as of yet.

Given its pleasing design and integration prowess, it is safe to say that the wearable can give the Fitbit Force and Nike+ Fuelband SE a run for their money.