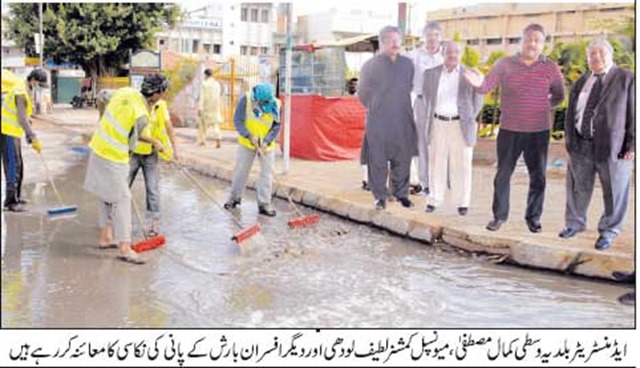 Jang news has published an allegedly photoshopped picture from Karachi appeared yesterday on back-page of Jang’s Karachi edition that has irked many professionals around the country.

The picture shows some officials, including Mr. Mustafa Kamal, posing as administering a water clean-up activity after recent rainfalls in Karachi.

Have a close look at the picture above; actually you don’t have to look too closely to see the photoshopped changes in the picture. What is disturbing is that they did not even put any effort into making the photoshopped picture; anyone can easily figure out that this is a fake picture.

Maybe people running the publication feel that we as a nation are so ignorant, brainless, and dim that we can believe everything that is put our way.

There is a lot of false information circulated in our country everyday and we do tend to believe most of it blindly; but at least others respect our intelligence and spend a lot of resources to foul us.

This alleged photoshopped picture, however, is a blatant attempt to undermine our intellect and aptitude.

It is advised to all publications that if you want to fool the nation at least do not insult us by offering such obvious fake stories. This nation has been played with enough times so now anyone looking to trick and deceive the people of this nation should think twice before proceeding with such false claims.