I/O developer 2014 conference in San Francisco revealed that Google wants Android to be a part of your life.

The company announced Android L, the next version of the mobile operating system. Android Wear, a custom version of the OS specifically tailored for smartwatches, Android TV and Android Auto, which allows Android smartphones to project data to the vehicle’s dashboard screen.

Android has now more than 1 billion active users around the globe and the company is aiming to reach out to the next five billion smartphone users.

For the purpose Google has announced “Android One“, which is described as a reference platform to help smartphone manufacturers build affordable devices with much ease. Google’s engineers will identify and design low cost hardware and the OEMs will manufacture it. 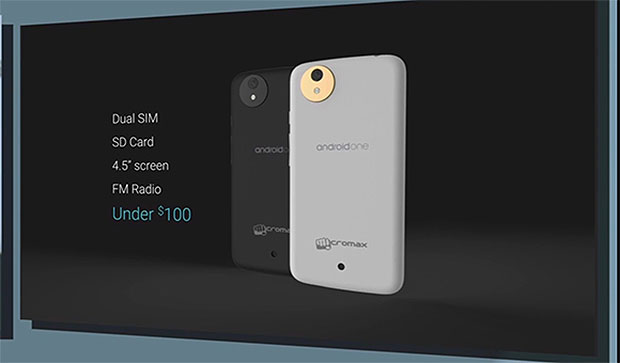 These low cost devices will be running stock Android, just like Nexus with Google Play. Which means users will get automatic software updates as well as recommended apps from Play Auto-installs.

Google is starting the One program from India with three manufacturers including, Micromax, Karbonn and Spice. The sample device features a 4.5-inch screen, Dual camera, Dual SIM, SD card slot and FM radio.

The details about processor and memory haven’t been revealed but if Google is in the control of both hardware and software, we can expect that these devices will perform much better than other low end smartphones.

There is no word on the expansion of this program to other developing countries including Pakistan. But we wish that it will happen soon as the dilemma of low end smartphone users in Pakistan is that they never get software updates and the performance of these devices is usually terrible.