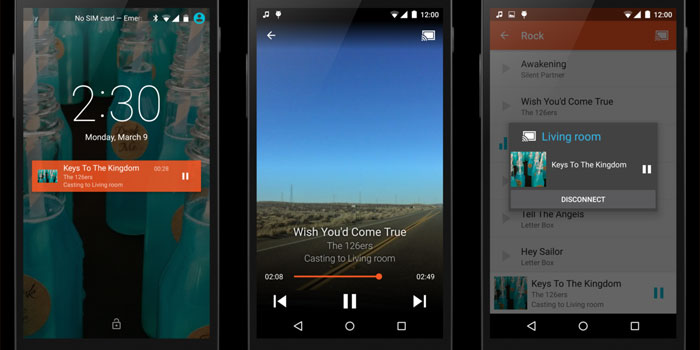 With the recent introduction of Android Wear, Android TV and Android Auto, Google has expanded its ecosystem to many different screen sizes and form factors.

With so many new screen sizes, Google is urging developers to create apps that look the best and perform seamlessly on all the different screens. To help the developers with this task, Google has released a new sample app called “Universal Music Player”. The developers can now use this app as a reference in their own apps.

The app combines the different features shown in Lollipop 5.0 and show developers the recommended way to build their apps for Auto, Google cast and Wear devices. The app utilises the recently launched features like MediaStyle notifications,MediaSession and MediaBrowserService.

These allow the developers to easily implement browsing and playback on multiple devices while using only a single version of the app. The app also helps the developers on how to add album artwork onto the lock screen, control music playback through Wear powered smartwatches and Auto powered car systems and much more.

“This sample, the Universal Music Player, is a bare-bones but functional reference app that supports multiple devices and form factors in a single codebase. It is compatible with Android Auto, Android Wear, and Google Cast devices. Give it a try and easily adapt your own app for wherever your users are, be that a phone, watch, TV, car, or more!”

If you’re a developer and interested in trying out the reference Music app, head to GitHub and search for the “Universal Music Player” or for more information head to Google’s Developers Blog.