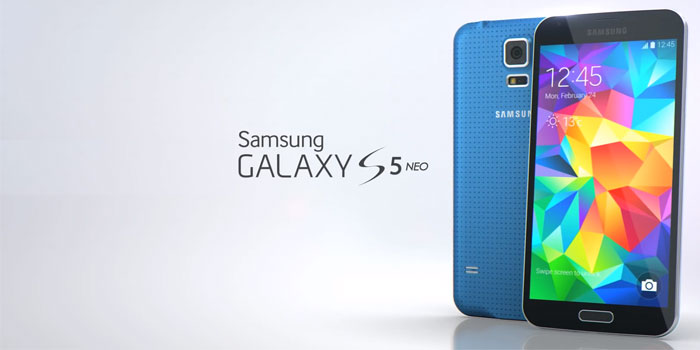 Samsung has announced a new Neo version to its aging Galaxy S5 flagship, the new S5 Neo. The smartphone is at its heart just like the Galaxy S5, with a few features out but also with a few additions.

The front boasts a 5.1” Super AMOLED display with 1080p resolution. The design of the phone is virtually identical to the S5.

Underneath, you get the home-baked Exynos 7580 octa-core processor with eight Cortex-A53 cores clocked at 1.6 Ghz. Alongside is 2 GB RAM, 16 GB storage, which is expandable via microSD, and Mali-T720 GPU.

Towards the back is a 16 megapixel camera with 1080p video (down from 4K) and LED Flash, along with a heart-rate sensor. There’s also a new 5 mp shooter above the display, along with an FM Radio.

The S5 Neo features IP67 certification, as well as a flapless microUSB port.

The phone also gets new, faster LTE Cat.6 connectivity thanks to a new modem. The fingerprint sensor failed to make the cut, though. The phone is up for pre-orders in a few countries, priced at 439 Euros. Final pricing might be different though upon its release in late August. It will be available in Black, Gold, Silver and Dark Blue.