Pakistan Super League (PSL) has started with the inaugural match of the first edition of the T20 league taking place today. Local and international fans have been eagerly waiting and the hype has reached its peak in anticipation of the 24-match event.

We recently reported that PSL management has offered fans to stream live cricket matches for free. Today, we come with details about the official PSL apps for Pakistani cricket fans. Two of the 5 participating teams, Karachi Kings and Peshawar Zalmi have also released official apps for Android smartphones. 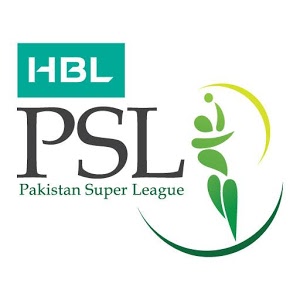 Pakistan Super League’s official app is a gateway to everything PSL. The app comes with live match streaming, live score, ball-by-ball commentary, complete scorecards and points tables, fixtures, and results. Other than that, everything related to PSL like teams, squads, latest news, videos and photos are also showcased in the app. 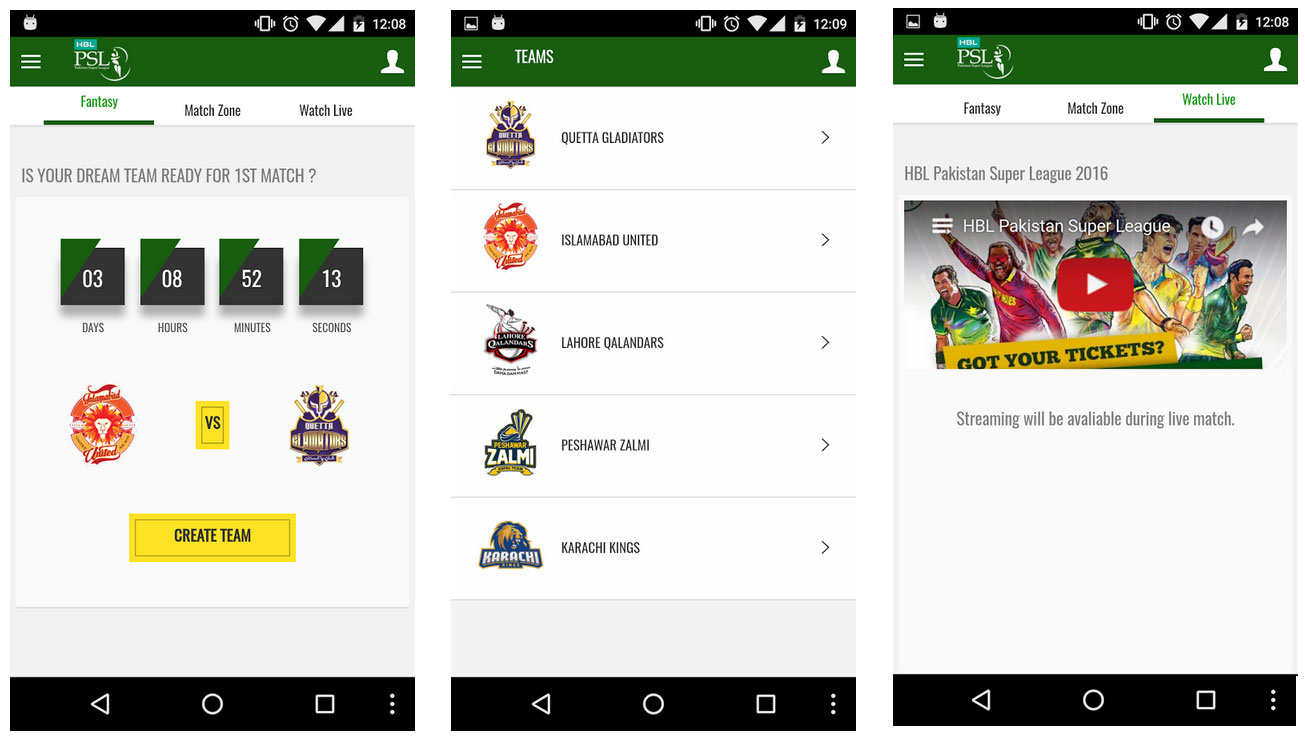 The app also comes with support for the PSL Fantasy League. Players can make their dream team and compete with their friends from within the app. Winners of the fantasy league will be offered exciting prizes. Those willing to participate can take part any stage of the tournament by signing up for an account from the PSL website or from the app.

PSL’s official app will give cricket fans access to official league merchandise via its online shop. Other than that users will be able to view team and player stats, view match reports, match analysis and behind the scenes coverage.

In short, it’s a fun way to stay updated with Pakistan first T20 cricket league. The app can be downloaded from the Play Store here. The rest can visit the PSL-T20 website using their Smartphones or PCs. 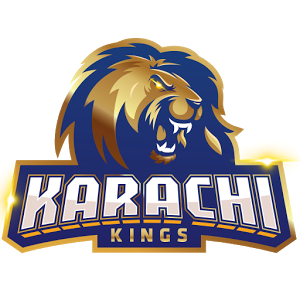 ARY group has launched the official app for Karachi Kings. Fan of the team, which represents a city of over 20 million and the province of Sindh, can stay updated with the latest info about their team via the app. 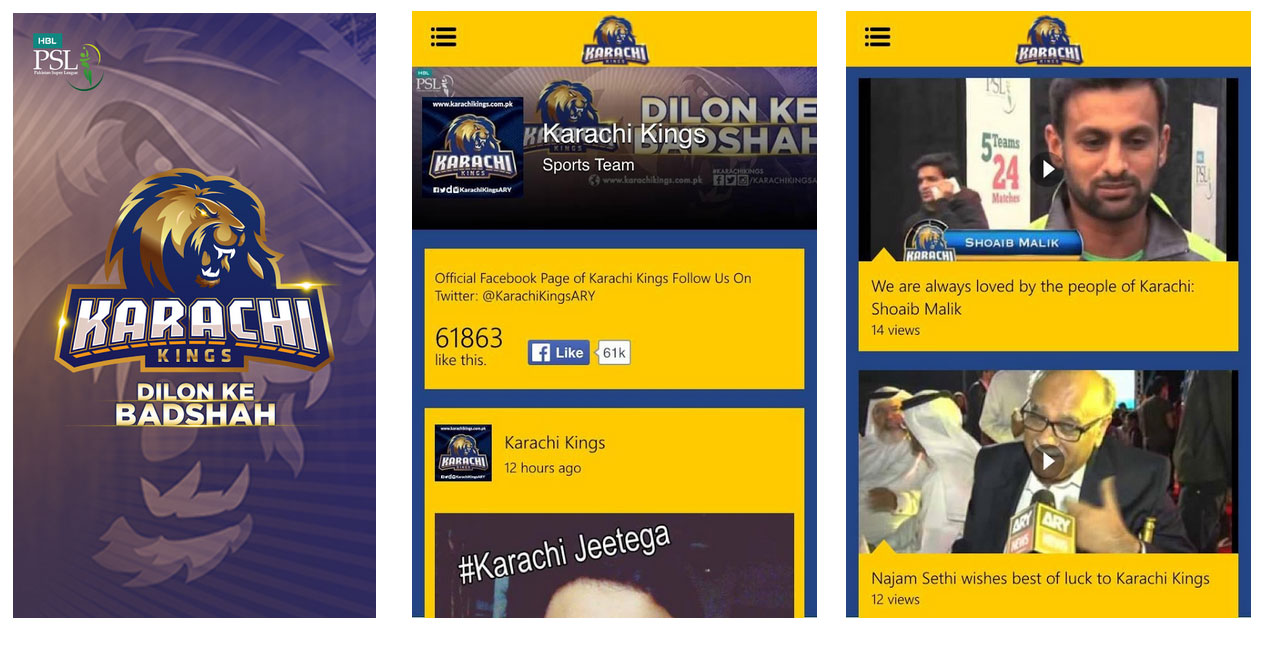 The app’s UI may be based on the aged Holo design, but the app offers fans with a platform where they can get to know everything about their favourite team. Users can access Karachi Kings’ Twitter, Facebook and Instagram account feeds straight from the app. There are a few categories which show team players, management, brand ambassadors and celebrities associated with the team.

Karachi Kings official app is also a portal to the latest news and videos related to the team. The app can be downloaded from Play Store here. 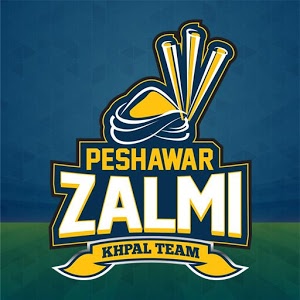 Haier sponsored Peshawar Zalmi recently released their official app for Android devices. Zalmi fans will surely love the app’s layout and its representation of the team’s logo “My team”. The app offers much more to Zalmi fans and they can stay connected with their favourite team’s schedule. 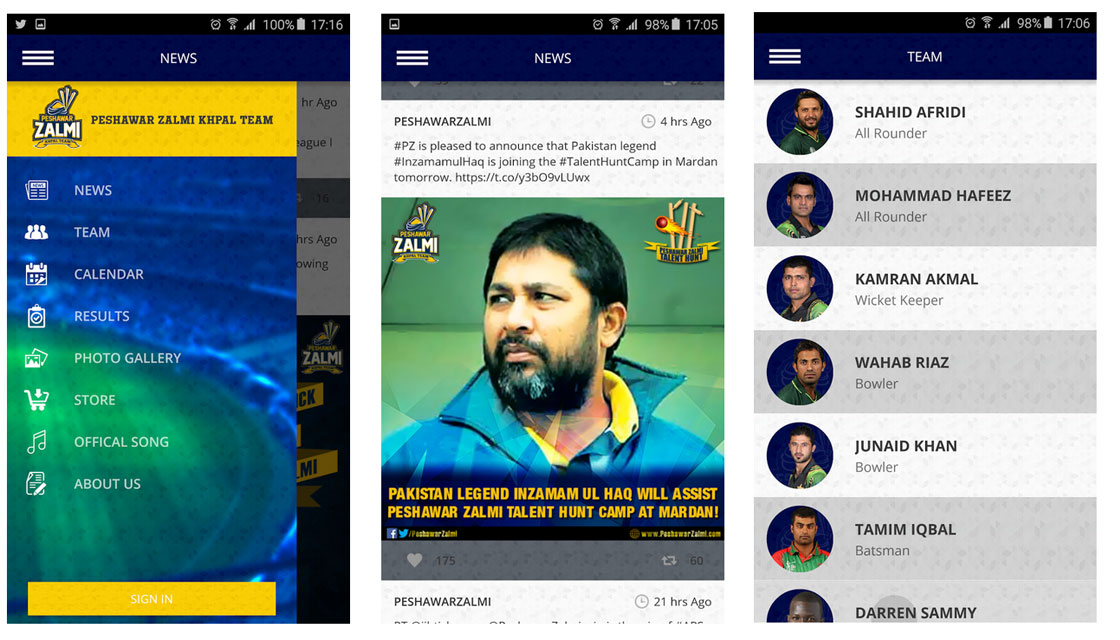 Zalmi app comes with a regularly updated News section which details every single bit of information about the team’s players, supporters, management and prize competitions along with pleasant looking photos and graphics.

The app also comes with players’ profiles, match schedule, points table, and results section. There is a separate section for fans to buy Zalmi merchandise and souvenirs. However, the section seems to be under development at the time of writing. Fans can also sign in to customise the app. The side menu also gives access to Zalmi songs and anthem along with a dedicated photo gallery.

Peshawar Zalmi’s official app can be downloaded from the Play Store here or the Apple iTunes here.