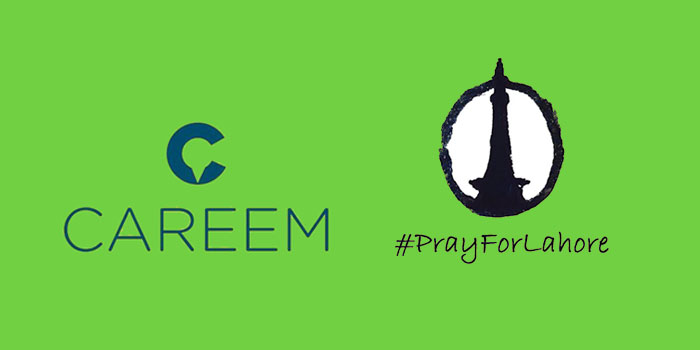 Careem, an Android and iOS app that offers chauffer cab booking, launched a free ride service to whomever wanted to donate blood to victims of last night’s horrendous bombing in Lahore.

At least 70 people were killed in a suicide bombing attack Gulshan-i-Iqbal Park of Allama Iqbal Town on Sunday evening, and over 350 people suffered injuries.

There was a dire need of blood amongst the victims, and the citizens of Lahore stepped up to stop the tragedy from compounding further than it already had. They were most willing to donate their blood for their fellow Pakistanis caught in the cowardly attack.

In fact, the response was so great that Jinnah Hospital actually had to put up signs that they have received the required amount of blood to treat the victims. And the queues at Shaikh Zayed Hospital’s blood bank were fully stocked with willing donors even at 4:00am in the morning.

A special thanks to our Careem Captains. All have opted to stay on duty for Lahore. pic.twitter.com/ngUp98Epr9

In a moment of chaos and confusion, organizations such as Careem also stepped in to help alleviate the suffering of Lahore residents. Careem gave away free cab rides to anyone who wished to donate blood. A promo code ‘DONATE’ was set up so that users of the app could use it to hail a cab and get en route to the local hospitals in need of blood supplies.

Offering Free Rides to anyone wish to donate blood to #LahoreBlast victims
Use Promo code: Donate
Helpline: 042-35909393
NOW booking only.

Their initiative was well received by the citizenry of Pakistan and many a people used the app to use their chauffer services to donate blood.

It is often said that quick thinking saves lives and this was but one of the ways for businesses to step forward and facilitate people in their hour of need.