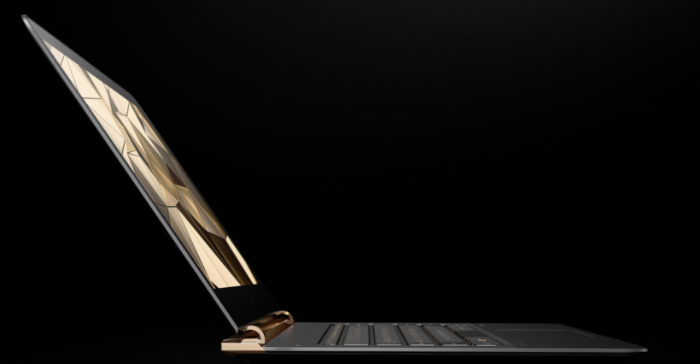 Apple may have got its biggest competitor, and it is coming from the most long-standing companies around: HP. Its latest laptop, the Spectre 13, is the thinnest in the world at 10.4mm, almost 3 mm thinner than the new MacBook.

And thankfully, the features don’t stop there as the machine is pretty well rounded. You get a 13” display, as is clear by the name, along with up to 8 GB RAM and a 6th generation Intel Core i5 or i7 processor.

The IPS display comes with 1080p Full HD resolution, without an option to give a 4K option or a touch-enabled panel. The back boasts a more modern looking logo which succeeds the previous round logo. The aluminum and carbon fiber design give it a more serious look.

The Spectre 13 weighs just 2.5 pounds, and will have up to a 512 GB PCIe SSD. It utilizes Intel’s new hyperbaric cooling system, which uses fans that suck air directly onto the processor and other components.

Connectivity options on the laptop include three USB Type-C ports which can all charge the laptop, with two of them supporting Thunderbolt 3. Beneath the chiclet-style keyboard is a glass trackpad, which hopefully works as well as its best competitor. On its sides are Bang & Olfusen speakers.

The size will likely not affect the battery life, which is said to provide 9 hours and 45 minutes’ worth of endurance. That’s thanks to four batteries which make up various sections of the chassis.

One thing which hasn’t improved over the MacBook is the price: $1170 and that’s just for the base model. If you want a no-frills laptop with no gimmicks, though, which runs Windows, this is probably as MacBook-like you can get, without ditching Windows.

Edit: An earlier version of the article was scrapped due to issues. We thank our eagle-eyed readers and regret any inconvenience caused.