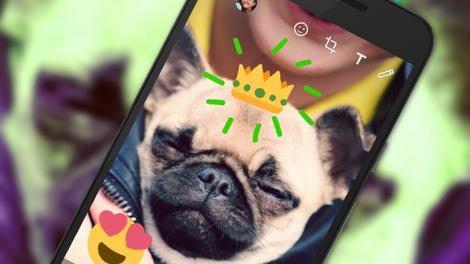 A feature that has been in Google Allo and Snapchat from the start is now making its way to WhatsApp. You can now doodle on images or add stickers and emojis on them.

New Features in the Update

Aside from doodling and adding emojis on images, the update brings front facing flash support (screen flash) for selfies and video zooming options in the app’s camera.

The update was available in WhatsApp beta and is now available for the general public. Only Android users can avail this update for now. iOS users will have to wait.

According to the WhatsApp blog:

When you capture a new photo or video or share one that’s already on your phone, you’ll automatically see the new editing tools. The WhatsApp camera feature now supports the front-facing flash so you can take the perfect selfie.

In low light and at night, this will brighten up your screen and improve the quality of your photo. We’ve also added a convenient zooming feature for recording videos – just slide your finger up and down to zoom in and out. And to quickly switch between front and rear facing cameras, double tap on the screen.

Adapting to the Competition

It should be mentioned that Facebook CEO Mark Zuckerberg once offered to buy Snapchat from its CEO Evan Spiegel a few years ago.

Even though both Facebook Messenger and WhatsApp boast around a billion users each, Snapchat still poses a major threat because of its immense popularity among teens and the younger demographics. Facebook seems to be adapting and introducing new features in anticipation of the fact that Snapchat will become a major competitor to its messaging platforms soon.

The update is not yet available at the Google Playstore but is expected to be available today.