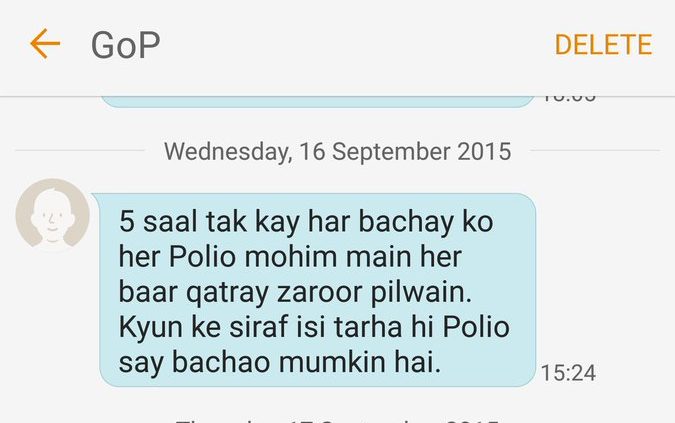 You may have received an SMS from Government one time or another. Most of the times its a promotional message.

While its a good initiative, but messages themselves are not punctuated properly, though they are spelled correctly and do not have grammatical mistakes in them. The same cannot be said for their “Urdu” messages though.

As you can see from the screenshot in the tweet above, the Roman Urdu written is riddled with mistakes. There are several more mistakes than the one mentioned in the tweet, “dusman” “siraf” “hafazati” “mukamaal” “teekoon” “katroon” to point out a few.

This is not a major problem in any way, which is why it should be remedied quickly as well. The aesthetics can have a major effect on a message’s portrayal. It shows your level of dedication and importance in the messages if you make mistakes like these.

The person handling the SMS server messages for GoP can use an Urdu font to send messages in Urdu instead of using Roman Urdu. This will prevent the writer from making any mistakes in the messages.

Using Urdu fonts will actually make more sense because Urdu messages are displayed using the Arabic fonts letters (like in Urdu, Persian and Arabic) and not Latin letters (English, French, German etc). This can ultimately lead to better reading and understanding of these messages as masses can read Urdu just fine obviously.

The most important point is that Roman Urdu is not proper Urdu, and was a mere workaround due to lack of Urdu support in phones, PCs. With the rise of Urdu typing methods, more people are writing using the proper script.

It does not suit the government to send public notices in such an informal way. Additionally, sending messages in proper Urdu would be readable for more of the public since not everyone can understand Roman Urdu even if they have slightly literate.