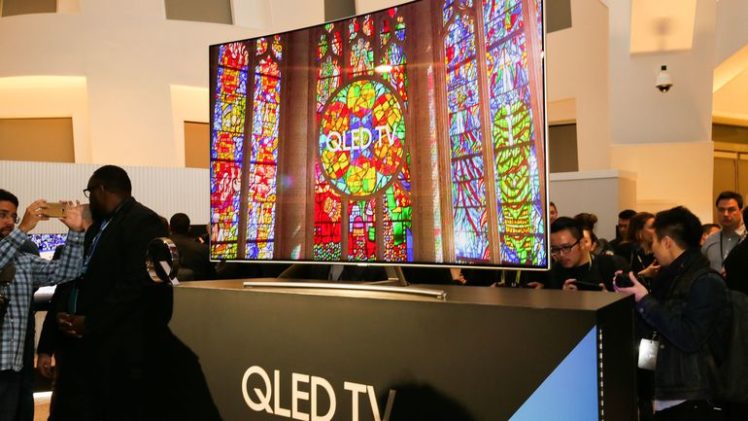 With Sony, LG and others pre-occupied with their new OLED panels, Samsung is apparently in a different ballpark altogether with its QLED, or quantum-dot LED technology which is arriving later this year with its Q9, Q8 and Q7 TVs.
The TVs are supposedly providing some improvements over OLED panels, particularly when it comes to brightness and viewing angles. At up to 1500-2000 nits of brightness, these are likely the brightest panels that you can buy. Samsung gives credit to something called “metal coating” to help achieve this, but refused to detail it further.
The QLED panels are also said to be supporting the entire DCI-P3 color volume, and supposedly has zero color degradation. There is still some form of backlighting, but in QLEDs it is beamed from all directions, compared to LCDs which throw it only from one direction or OLEDs where pixels self-emit it.
Samsung is also putting a lot of focus on its new mounts and stands. One such mount goes towards the back of the wall and seemingly leaves no gap between it and the TV. There’s another such stand which can swivel the TV, while a new thin, fiber-optic cable essentially blends into the wall and become near-invisible.
The content is provided by the Tizen interface, which comes with its own music section and a dedicated sports mode, doubled with services such as Netflix, Amazon video and Hulu.
The panels are said to be available some time in 2017 in 55, 65 , 75 and 88-inch iterations with no further details mentioned.