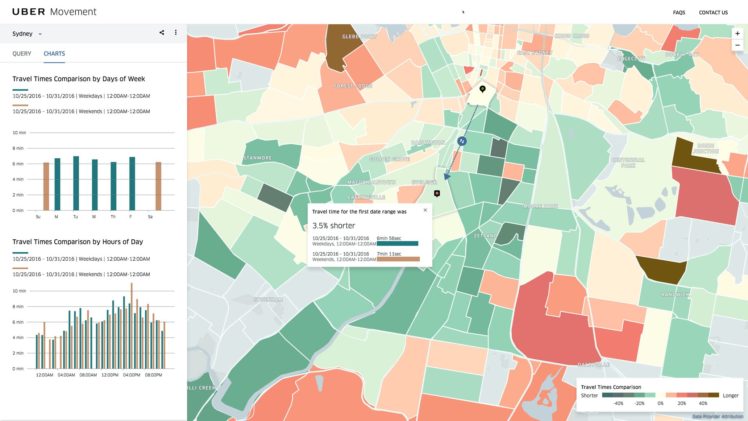 You may have used Google Maps at some point to avoid traffic jams. What if you had access to detailed information about traffic jams or roadblocks in an area before they occurred? What if city planners had all the trends in their hands so they could plan the flow of traffic in a more efficient manner? This is now possible thanks to Uber’s “Movement” website.

The data comes from the millions of rides each day on the ride sharing platform, which gives Uber detailed insight on the traffic situation in various parts of a city. It was no easy task though. A team of 10 engineers at Uber worked for 9 months to compile the data and make it usable for everyone.

As the data comes from individual rides themselves, Uber makes sure to anonymize and aggregate the data. No personally identifiable user information is available through Uber Movement.

Uber is following in the footsteps of other companies which also share their data with the local governments.

Waze has a “Connected Citizens” program which informs the city officials with the data they require. In exchange the officials provide Waze with info about any roadblocks or construction sites on roads beforehand.

Strava, a cycling app, sells its data to the cities about where the residents like to ride their bicycles.

For now the service is only open to city officials, planners and policymakers. It will be made available for the general public in mid February.

The service is also currently limited to three cities, namely, Manila (Phillipines), Washington DC and Sydney (Australia). It will become available for every city once the website is made available to the public in February.

You can visit Uber Movement here.