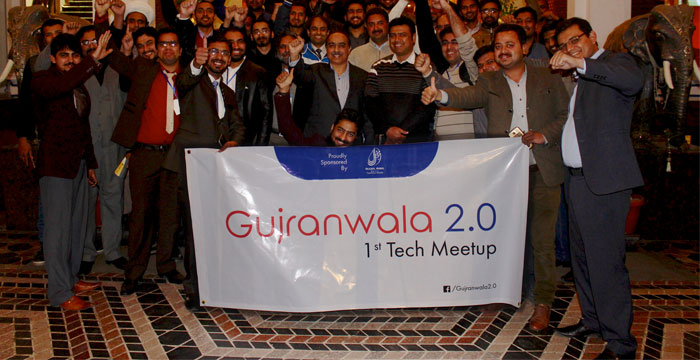 Founded on December 13, 2016, Gujranwala 2.0 aims to empower the youth of Gujranwala through innovation, creativity, and entrepreneurial spirit. It is an organization which would go a long way in helping collaborations between industry, institutions, freelancers and students.

Gujranwala 2.0 aspires to bring forward the talent by connecting young entrepreneurs with the right people, providing internships, jobs and grooming opportunities for students in Gujranwala and to elevate the already prospering tech industry in the city.

Considering the fact that there are more than 60 small-scale companies already working in Gujranwala, serving both local, national, and international clients. The need for such a platform becomes even more significant. The people previously working in unison will get to share their ideas, learn from other people in a more competitive environment thereby enhancing their own tool-set.

Just after formation, Gujranwala 2.0 hosted an all-Gujranwala tech meet-up of Gujranwala IT industry on January 04, 2017. The event received warm appreciation by the Gujranwala-based tech companies, which meant that more than 40 companies as well as representatives from universities attended the event making it a huge success.

The January 4th event was just to test the waters. The main purpose of the event was to bring and engage with local tech companies due to lack of IT community. A common perception was there were a limited number of software houses in Gujranwala. Due to the event, participants found out that the number was well above 40.

The companies which participated in this event included:

and more. This event was sponsored by Mughal Mahal Hotel.

Having started with a bang, Gujranwala 2.0 will now be back with a mega event on 4th February 2017.

The team is  collaborating with SMEDA to invite 400 local small businesses and big enterprises. These include Lahore’s tech companies and organizations like PITB, PSEB, [email protected] and international companies like Microsoft.

The purpose of the event is to highlight Gujranwala’s tech potential.