Other than announcing its new P10 and P10 Plus duo, Huawei also took time to expand its smartwatch lineup. The new range includes two Android Wear 2.0 watches, Watch 2 and Watch 2 Classic, that build upon the company’s first Android Wear watch from 2015.

While the original Watch used to be an elegant, barely-noticeable gadget, the new watches feature a sportier look which might polarize a few people. The two variants differ primarily in terms of design; the Watch 2 comes with silicon straps and an extra button for quickly opening an app, while the Classic attempts to target more of the original buyers with a stainless steel body and 22mm straps. 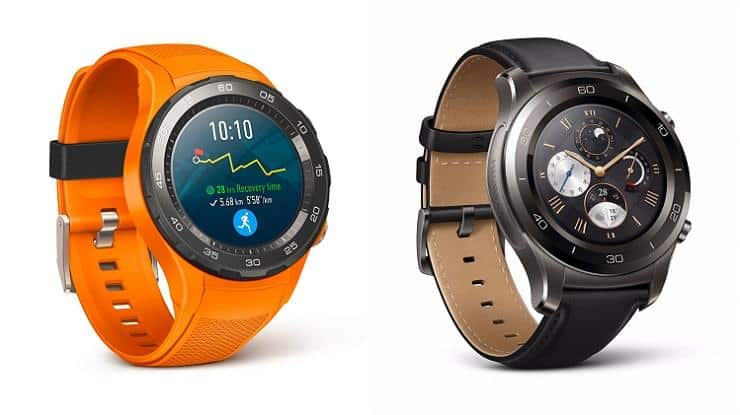 Both are still quite bulky at 12.6mm thick, though. The front is covered with a 1.2-inch OLED display of 390 x 390 resolution. The wearables have IP68-resistance against water. The sapphire crystal glass display on the front is replaced by Gorilla Glass 3 to save weight.

There are two buttons for controls. Battery life is quoted to last up to two days on a full charge, or 10 hours with full activity mode on including the GPS and continuous heart rate tracking, though a special power-saving mode (which is activated at 10% battery level) can provide up to 40 hours of extra run-time (or 25 days if activated throughout).

As usual, a sleuth of sensors is on-board including a new heart-rate sensor. With its partnership with First Beat, the watch can also help runners with custom plans. It can use the sensors to give a VO2Max measurement.

Under the hood, the watches have the mainstream 1.1 GHz Snapdragon 2100 processor with 768 MB of RAM as well as 4 GB of storage. Connectivity options include NFC, Bluetooth, Wi-Fi, LTE (only for Watch 2) and GPS. On the software side, the watches run on the new Android Wear 2.0.

Additionally, there will also be a Watch 2 Porsche Design in the coming weeks which was designed in collaboration with the popular carmaker.

Huawei hasn’t mouthed a word as to when can we expect the watches to hit the market, and at what price. Its predecessor went up for $350 at launch so expect to see this duo to cost in the same ballpark, too.