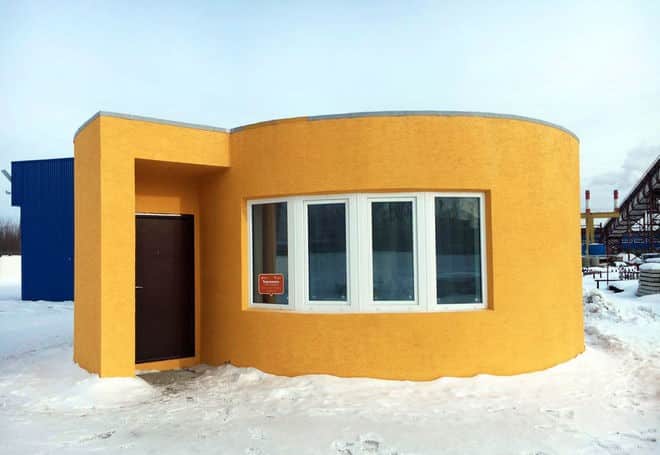 A start-up in Moscow has built a house entirely out of a 3-D printer and it looks so cozy! This completely changes the way houses and buildings will be built from now and increases the importance of the 3-D printer.

This is the first 3-D printed residential home and it was built in less than 24 hours at a much cheaper cost than when houses are built the conventional way. Apis Cor, a new startup has managed to build this house from scratch at a cost of just a little more than $10,000.

The building’s walls and partitions, made entirely of concrete, were built by a mobile 3D printer on the site itself rather than building the entire structure in panels at an off-site facility and then joined together at the place. Later the machine was removed from the site while the workers added the windows and the roof and finished the interior.

3-D printing does a lot for the way buildings and structures are built right now. The conventional way requires a lot of labour, materials, and time. With 3-D printing on the site of construction itself, it reduces pollution, is fast and eco-friendly with the materials it uses while also being reliable.

Further, 3-D printing also makes housing accessible to all at very cheap prices. This is because of the reduction in time needed to construct a building, the labour required, and all the other stuff that conventional house building needs. All the hard work has been shifted to machines which do not need to be paid.

The house already built by the company in Moscow is small but cozy. Its about 400 square feet and has an unusually curved shape thus enhancing all that 3-D printing can do and the fact that houses can now be customized according to the preference of the owner.

The interior of the house, however, is the same as any other conventionally built house. Built in a studio-style way, the house has a hall, bathroom, living room, and kitchen and after pairing itself with Samsung, Apis Cor also managed to install electronic appliances such as the television which has the same curvature as the wall of the living room.