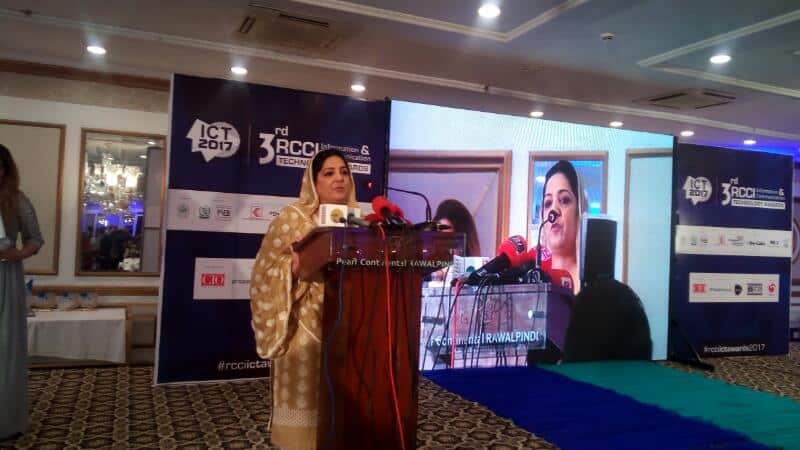 Anusha Rehman, Minister for Information Technology and Telecom, today claimed that every village in the country — with at least 100 inhabitants — will have 3G coverage with-in next two years.

She was addressing 3rd Rawalpindi Chambers of Commerce and Industry ICT Award 2017 moments ago.

Minister said that Pakistan currently ranks at fourth position for freelancing in the world and this number is only going to grow as internet penetration has increased from just 2 percent in 2014 to 27% in less than 36 months.

She said that this was made possible through stretch of 3G and 4G services and now it will be government’s priority to take mobile broadband services to far flung areas of the country.

Anusha recalled that PML(N) has always given special attention to IT sector and this is only why the growth during past three years has remained remarkable.

She said that this positive change has been noticed at global scale and four awards — bestowed to Pakistan’s IT Ministry — speak volumes about how world is reacting to Pakistan’s growth in IT sector.

It maybe recalled that GSMA had awarded Pakistan for conducting transparent 3G/4G auction in 2014 and then more recently MoIT was awarded for its Telecom Policy 2016.

Chairman RCCI, while explaining the vision behind awards, said that its an effort to promote soft image of the country.