Pakistan Stock Exchange was down by intraday low of – 858 points after new taxation measures were announced in Budget 2017-18. The benchmark index witnessed a second bearish session of the week after closing in negative. The budgetary developments are still negative for the market sentiment.

The Finance Minister announced imposing a flat capital gains tax (CGT) rate of 15% for filers, and a whopping 20% for non-filers of tax returns which will be applicable from July 1.

The policy saw a huge negative reaction as the profit taking was seen. The investors were looking to sell at a lower CGT rate which is applicable now. 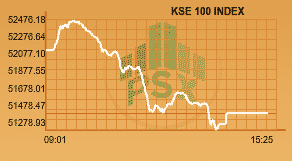 Shares of 379 companies were traded. At the end of the day, 81 stocks closed higher, 289 declined while 9 remained unchanged.

Top Contributors of the Market were: