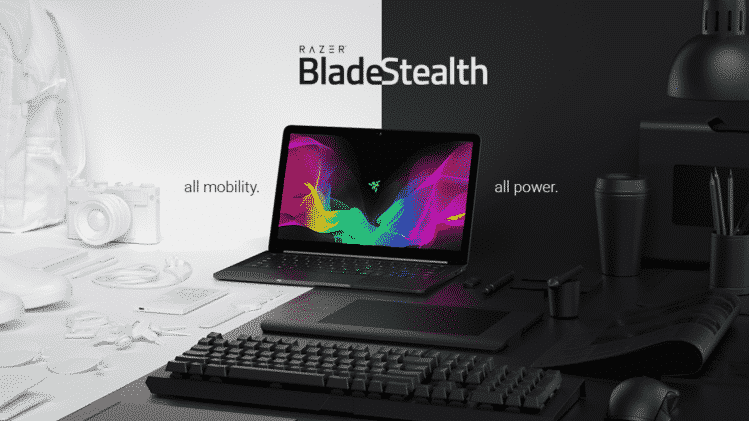 One of the more compact laptops in the Razer lineup, the Blade Stealth, is now being updated to bring even more in the same profile. Although it gets

The new Blade Stealth comes with a 13.3-inch IGZO display with 3200 x 1800 resolution and 400 nits of brightness. It features 100% coverage for sRGB color gamut, 178-degree viewing angles and is touch-enabled to boot.

Design-wise, the Blade Stealth has shed half an inch of bezel from either side of the display, and as a result features a larger 13.3-inch panel, instead of the 12.5-inch one on its predecessor. It weighs a bit more at 2.93 kilograms.

In the face of rising acceptance of minimalist design, (among gamers as well) the garish green logo on the back is being replaced by a more grounded, black one. The color of the laptop is changed to gunmetal gray, while the backlit on the keyboard is now white.

Looks and design only tell part of the story, the internals are what really matter to most. There, you’ll find a 7th-generation 2.7 GHz Intel Core i7-7500U processor, alongside 16 GB RAM and 256 GB solid state storage.

Unfortunately, the Blade Stealth doesn’t come with a dedicated graphics card, opting instead for Intel’s HD 620. Even though its not much when compared against the likes of AMD/Nvidia graphic cards, Intel HD 620 can offer basic gaming capability.

Razer does sell you its external hub (for adding an external graphics card), the Core for $500, but that’ll mean even more expenditure for gamers.

Razer has replaced the trackpad with a better Windows Precision unit, while Thunderbolt 3 is still retained (it is used for connection with the Core).

The choice here comes down to how much the design matters to you. Otherwise, there are much cheaper and readily options available in the market with both Nvidia and AMD’s discreet GPU included.