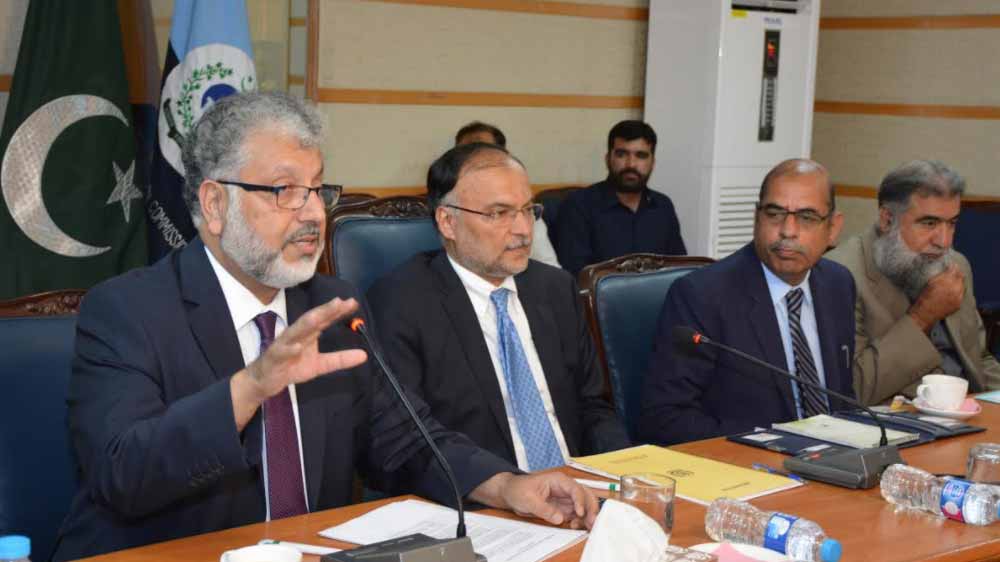 The Higher Education Commission (HEC) management and the heads of universities across the country held a brainstorming session with Mr. Ahsan Iqbal, Minister for Interior on measures to counter radicalisation and curb extremist behavior among university students.

The Minister highlighted significance of the role of university leadership in curbing such tendencies among students. He stressed upon the Vice Chancellors and Rectors to take this challenge proactively, and not only increase their interaction with the students but also come up with strategies to use potential of the youth for positive activities.

The session, which was a part of deliberations in the wake of growing violent behavior in the institutions of higher learning, was attended by Dr. Mukhtar Ahmed, Chairman HEC, Dr. Arshad Ali, Executive Director HEC along with over 77 Vice Chancellors and Rectors from across the country.

Terming the recent arrest of Karachi University students as a wake-up call for preparation on a new front. He said that the youth are prone to negative ideologies shared on social media. “The use of digital facilities in universities requires to be properly monitored so as to ensure use of WiFi services purely for academic purposes,” he said.

Sharing Government’s initiatives to deal with the issue, the Minister said terrorism and extremism have been dealt with iron-hand under the National Action Plan (NAP) and the Pakistan armed forces and law enforcement agencies have played a very admirable role in this regard. However, he said that the non-kinetic areas wherein information plays a major role also need to be paid due attention.

“Apart from other steps to stem the menace of extremism, we need to employ the counter-narratives on extremism and violence in order to positively influence the minds of youth.” He emphasized the need for giving students a space to express their viewpoints on religious, social and national issues. He urged the academia to provide a substitute for student unions, as the lack of student bodies may lead them to get divided into parochial organisations on regional and ethnic grounds.

“There is a need for developing a task force in each institution to engage students in co-curricular and extra-curricular activities in addition to formation of directorates of students to address students’ issues,” the Minister said. He also underscored the importance of career counselling activities to guide students about their future. He said that every campus should have at least one Psychiatrist to address the issue of students’ involvement in extremism and use of drugs. Empowering the universities administration has to be ensured to effectively monitor anti-social activities, he said, adding that the enhanced faculty-student engagement may also yield positive results with regard to nipping the prevailing social evils.

Citing a hadith, the Minister said Islam preaches peace and good relations among people. He said that the big challenge ahead of Government and academia is to form a ‘body of knowledge’ to ascertain the root causes of growing tendencies towards extremism. “The time requires us to conduct research and decode the minds employed in criminal and extremist happenings,” he emphasised.

The Minister announced that Interior Ministry and HEC will jointly organise a ceremony to mark the International Peace Day on September 21.

In his remarks, Dr. Mukhtar Ahmed expressed his concerns that terrorism, which used to be associated with seminaries in the past, is now being linked to universities as well. “Involvement of a few students, however, does not mean that a whole university or the entire higher education sector is corrupted with this scourge.”

The Chairman said that these issues have to be addressed with joint efforts. He urged the media not to overplay the issue, as it may tarnish the image of higher education institutions at international level.

He maintained that HEC has been constantly sensitising the top university leadership of possible security threats. He stressed the need for promoting tutorials, sports and extra-curricular activities making them part of universities’ routine business for constant engagement with students. He also shared the HEC’s plans to organise University Olympics. He said HEC has also directed for holding public lectures to promote understanding, tolerance and peaceful co-existence.

The Chairman said the members of Pakistan Peace and Development Corps (PPDC), earlier known as Youth Development Corps, will take an oath on the International Peace Day being celebrated on September 21.

Dr. Mukhtar called for increased visibility of faculty in universities for student engagement regarding positive activities. He asked VCs to provide mentoring and counselling activities, including extra-curricular activities. He mentioned civic engagement in 40 universities where students are encouraged to engage with the community for a minimum of 10 hours.

Referring to the 15th anniversary of HEC, Dr. Mukhtar Ahmed said urged the universities to hold open-house activities or seminars to showcase their own achievements in the last 15 years. “This will encourage the youth and help us give them a hope,” he affirmed.

University heads expressed also shared their suggestions regarding measures to ensure peace and curb violent incidents among students. They held out assurance that the universities will extend all-out support to the Government and HEC in their efforts to clear the higher education institutions of radicalisation.