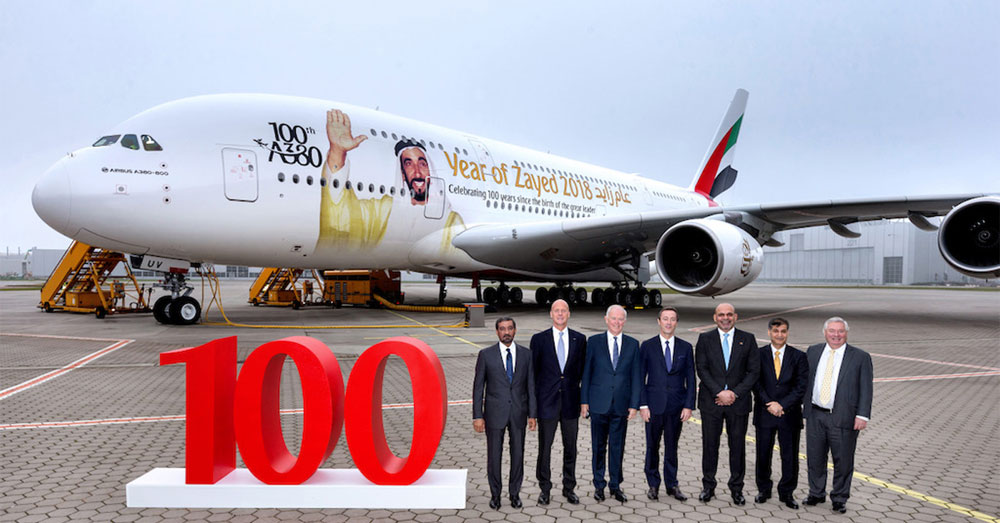 Emirates is celebrating the milestone delivery of its 100th Airbus A380 aircraft. Adding to the celebrations, Emirates unveiled a special tribute to the late HH Sheikh Zayed bin Sultan Al Nahyan, founding father of the United Arab Emirates, with bespoke livery for its 100th A380.

Emirates enjoys the unique placement through its first A380 in 2008 that set new standards for customer experience, including the Onboard Lounge, Shower Spas, free wi-fi and advanced inflight entertainment systems in all classes, as well as many other features.

To date over 85 million passengers have flown on the Emirates A380.

The airline has implemented countless improvements on board its A380 fleet since 2008, ranging from subtle updates such as the addition of in-seat USB ports and introduction of electric window blinds, to more major upgrades such as relocating overhead luggage bins to provide a more spacious cabin, installing bigger and better inflight entertainment systems and a newly revamped Onboard Lounge.
Emirates’ A380 operations

Emirates is the world’s largest operator of the A380 aircraft, flying this iconic double-decked jet to 48 cities on six continents on scheduled services. Including one-off flights, special commemorative services, test flights and other operational deployments, over 70 airports to date have welcomed the Emirates A380.

The airline receives on average 11 A380 deliveries per year, starting from its first aircraft in August 2008. In its 2016/17 financial year, Emirates received a record 19 new A380 aircraft.

In Dubai, Emirates operates the world’s largest A380 hub with an entire purpose-built concourse dedicated to A380 operations.

The US$ 3.3 billion facility was an investment to offer travellers unprecedented convenience and comfort with direct boarding to the A380 aircraft from the First and Business class lounges and amenities including duty free shops, spas, an array of dining options and more.

Emirates has 1,500 flight deck crew and over 23,000 cabin crew specially trained to operate its A380 fleet.