PSX is finally getting back to normal with another positive session.

The stock market witnessed another bullish session on Thursday, as the index managed to close its 11th consecutive session in the green with midday buying helping the market improve gains. 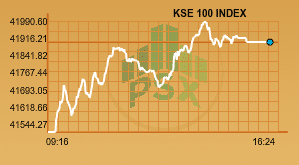 The KSE-100 index increased over 451 points during intraday trading as some profit taking was seen during the day as well.

The investors were keenly waiting for United States’ stance, that will be announced later today. There are still concerns over ongoing tensions in US-Pakistan relations, responsible for the small resistance in the market.

A meeting of the Parliamentary Committee on National Security was held today to discuss the allegations levelled by the United States against Islamabad. The leaders decided to hold another session next week and extend invitations of attendance to the military leadership and defence institutions.

National Assembly Speaker Ayaz Sadiq presided over today’s meeting, which was called after US President Donald Trump accused Pakistan of basing its relationship with the US on “nothing but lies and deceit”.

Cement sector was up as it witnessed a sales boom over the last four years, more so this fiscal year as total dispatches reached 22.243 million tons in July-December 2017 against 19.806 million tons during corresponding period of last fiscal. Pharmaceutical sector also witnessed huge gains during the whole week whereas the Exploration and Power sector was up due to increase in Crude Oil prices.

Volumes are getting better day by day as all shares index had a traded volume of 222.35 million shares today. Overall, stocks of 360 companies were traded on the exchange, of which 196 gained in value, 140 declined and 24 remained unchanged. In KSE 100, 127.64 million shares were traded with a net worth of just Rs. 7.07 billion. 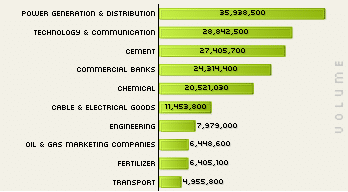 K Electric Ltd was again the volume leader as with 34.05 million shares changed hands to close at Rs. 6.95, up by 3.26% on the back of rumors that a deal between the utility and Shanghai Electric is all set to finalise in coming days and announcement regarding revision in MYT soon.